According to the BTO, fewer than 1 in 200 adult birds suffer from a beak deformity. Arriving at a figure like that can't be easy as a large scale survey would need to be undertaken. Fortunately for them, many members, volunteers and enthusiastic nature lovers are all at hand to participate in such a survey (which is ongoing) called the Big Garden Beak Watch.

There are many different types of beak deformities, affecting either or both mandibles, in a manner of different ways. This Great Tit was first spotted here on the 3rd September, with what seemed at first to be just something stuck to his beak. In the time he was around on that day, it couldn't seem to shake it off (though it did seem to try). The (presumably) same bird was back again earlier this week, with the same object stuck, again trying to shake it off. This leads me to think it's not a beak deformity as such, though I'm not certain we'll ever be sure either way. 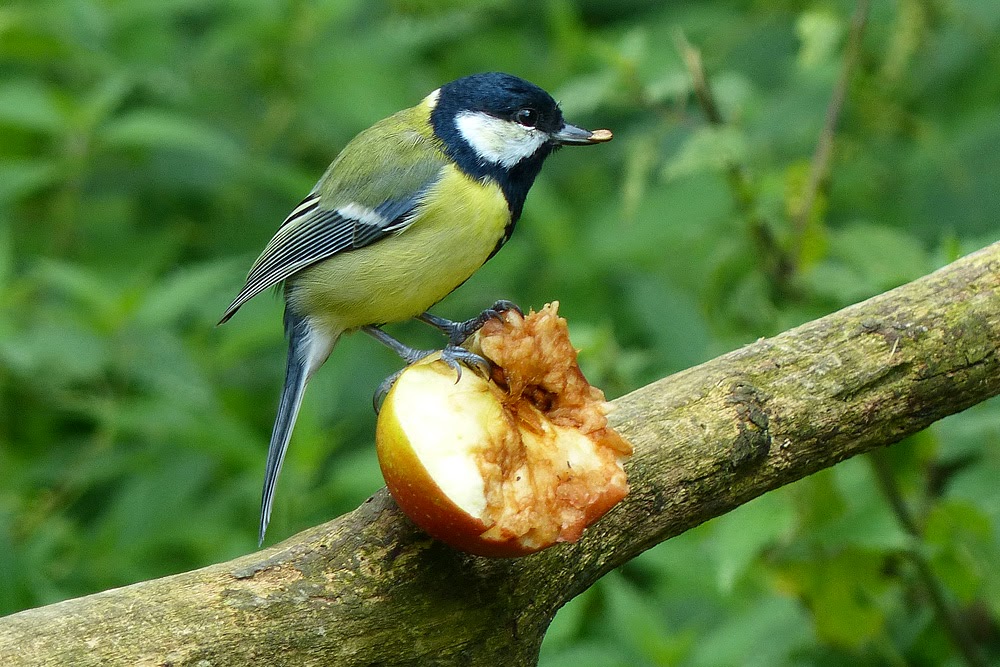 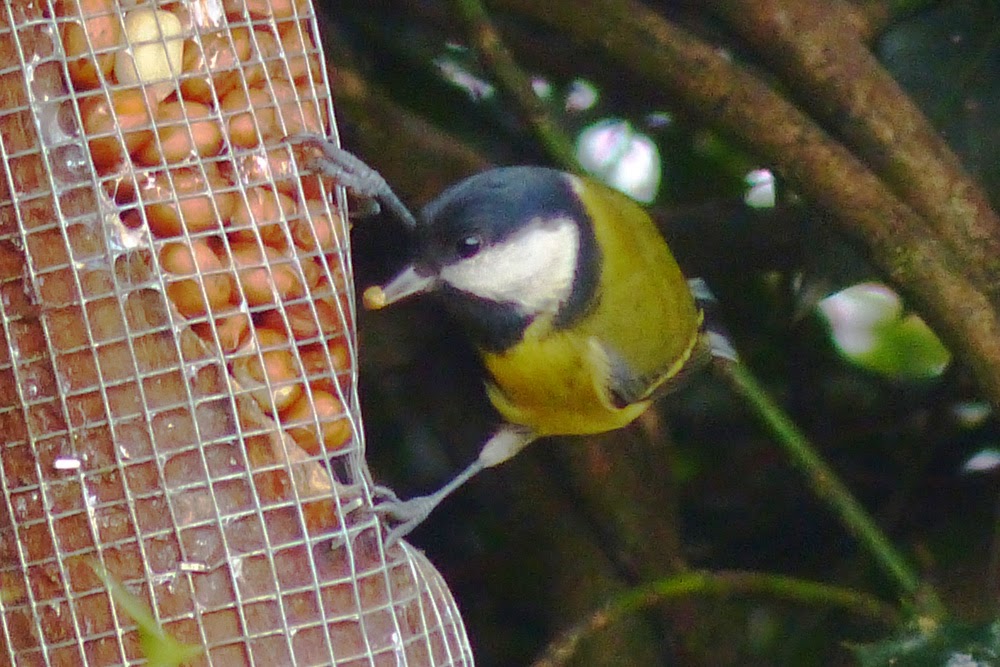 We have, however, spotted a few confirmed (and recorded) beak deformities here over the years:


We have had a few reports and photos brought in to us of beak deformities in Great Spotted Woodpeckers and Blackbirds too, though a total of 36 species have been recorded through the Big Garden Beak Watch. Please do record your sightings to the BTO - this survey, along with many others they undertake, including the Abnormal Plumage Survey, help them to gain a greater insight in to the causes of irregularities in birds.

Number 93 on our species list, a cracking male Black Redstart! We've said for a long time it's a bird that we could well get here, sitting on top of the barn roof where the Wagtails, Sparrows and Doves often sit. Today was the day! At about 2pm, just when I was about to leave for a delivery, Allan asked 'what's that?', just as it flitted off the roof to catch an insect then dart back to where it was. Robin shape, but not Robin behaviour, so I called Black Redstart! By this point, Allan had already come to the same conclusion so we both went running back in to the shop to get our cameras. Fortunately for us, the bird stayed for over an hour and proved to be incredibly obliging, allowing both of us to get some (what we think are) good shots. 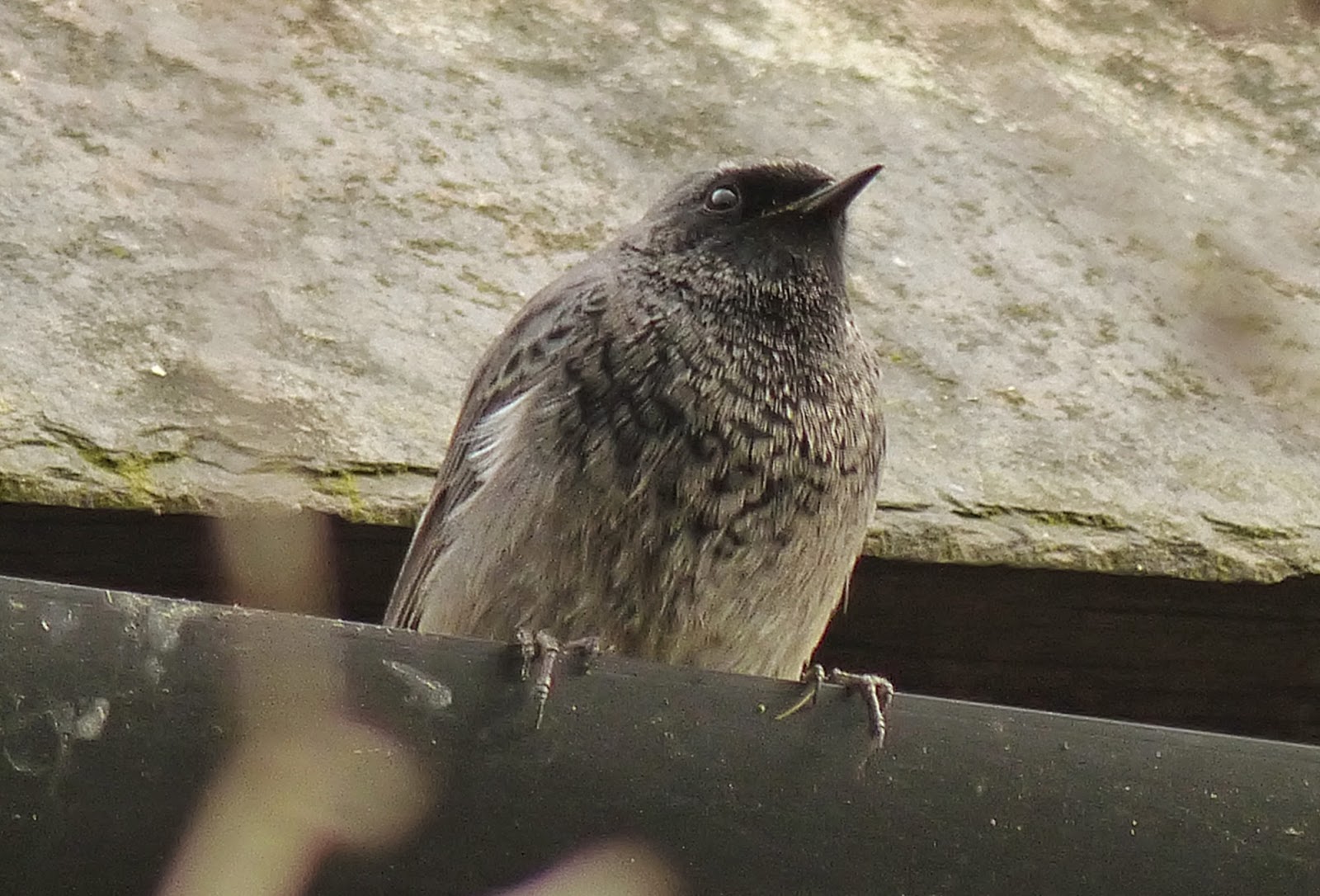 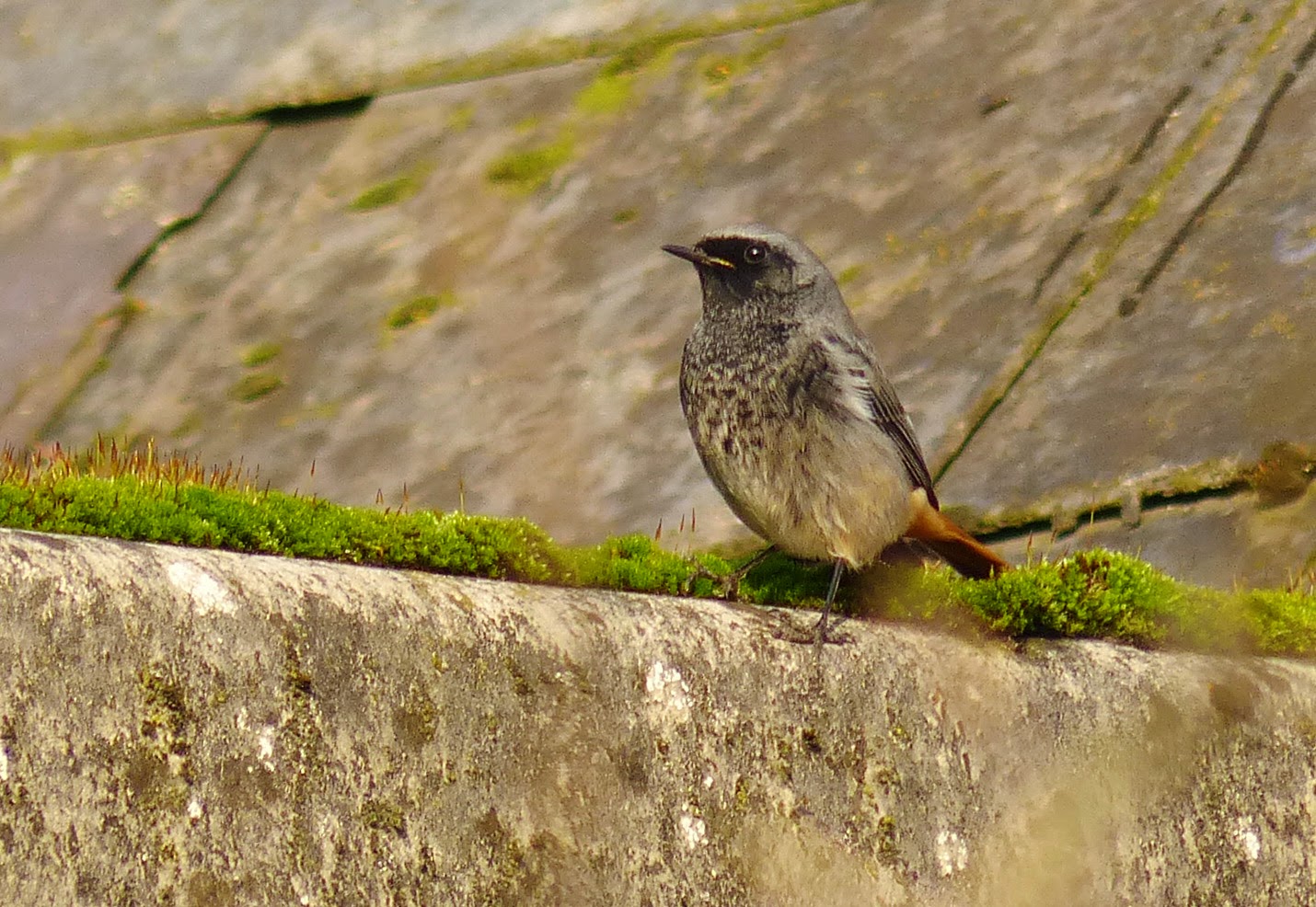 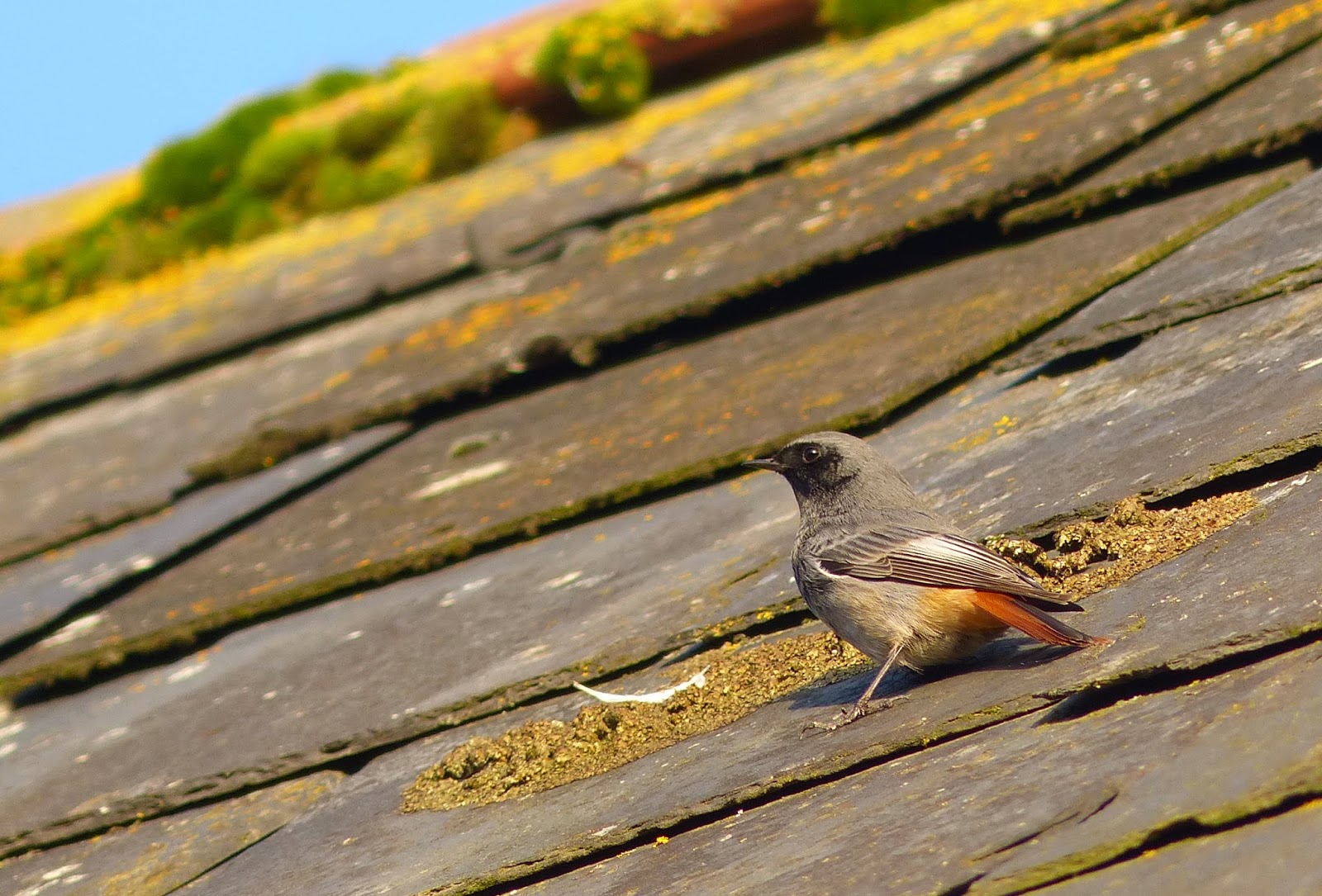 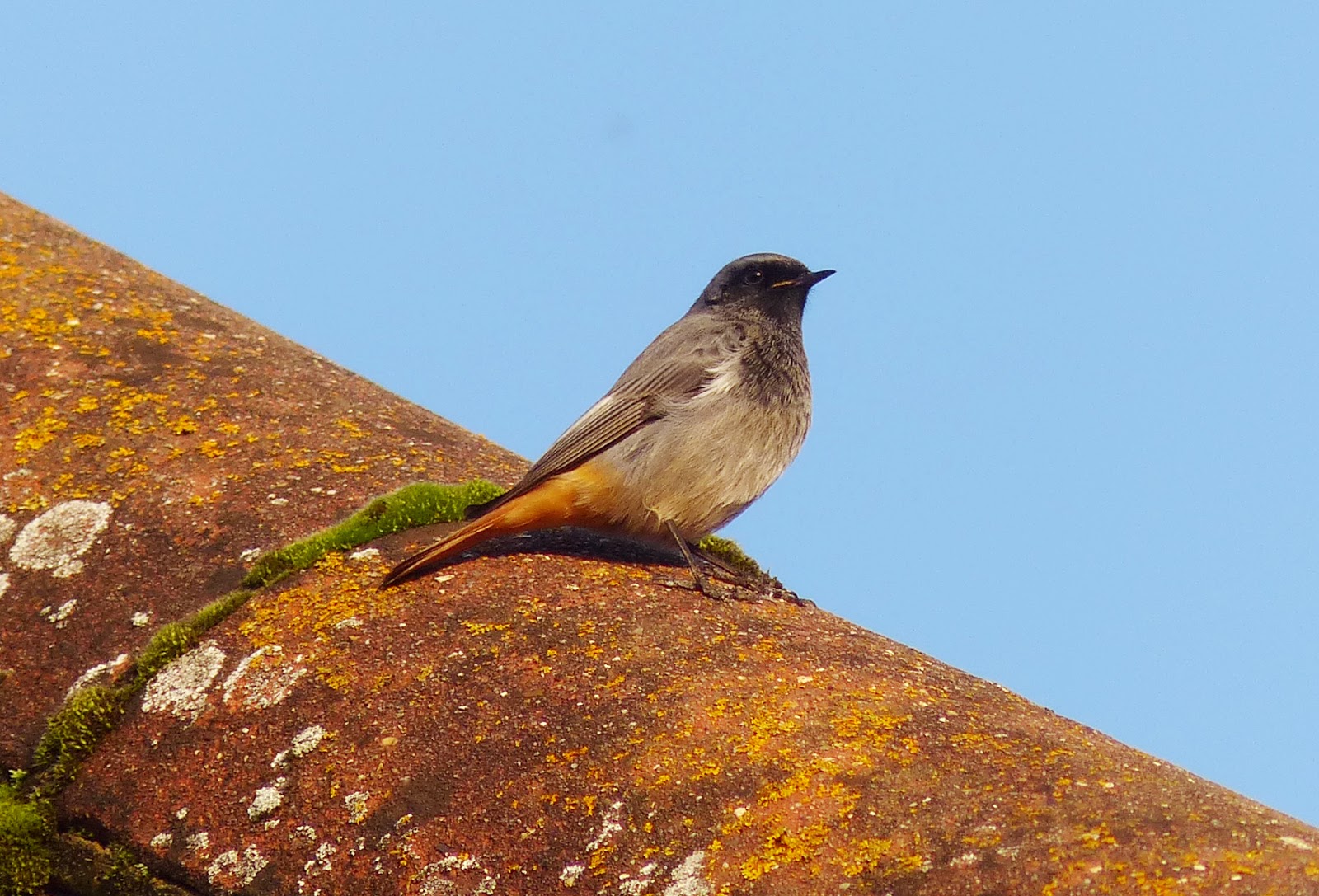 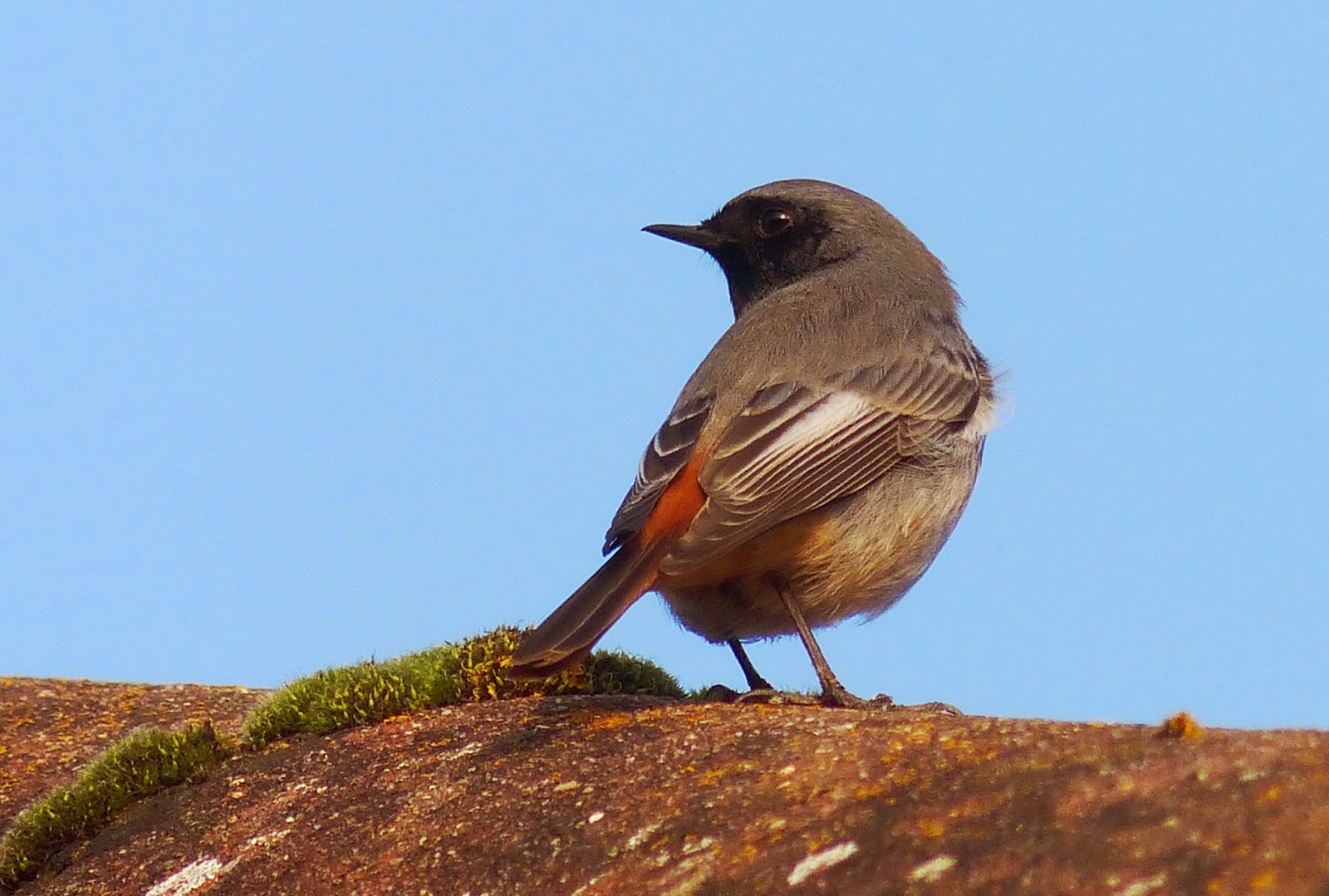 First Brambling and other sightings

The first Brambling of the winter for us turned up on Saturday, unfortunately neither Allan or I were there to spot it but a keen young birder called Liam was on hand to spot and photograph it. He kindly sent us the photos he took of this beautiful bird. 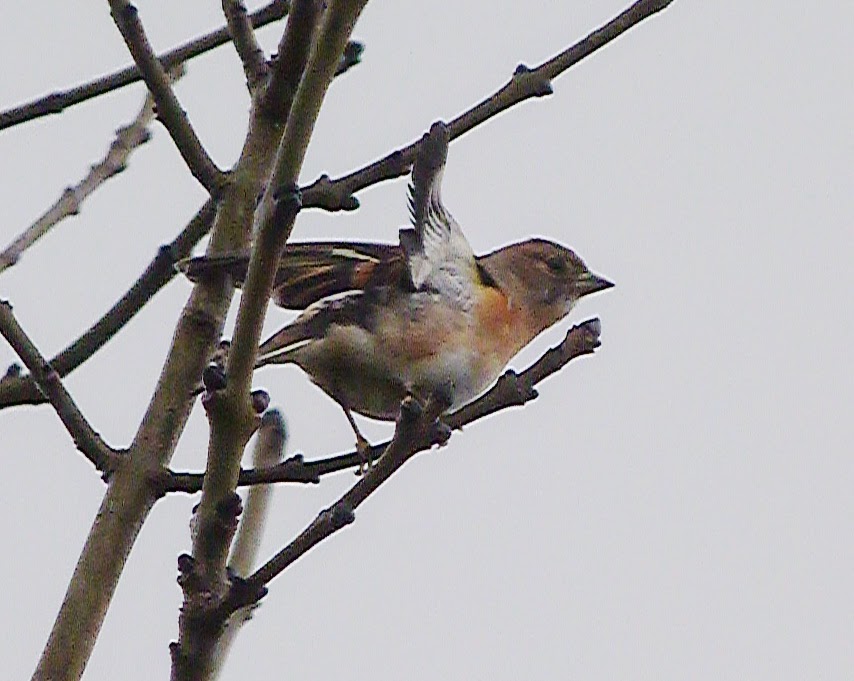 A pair of Ravens were around late last week too, only a brief sighting as they passed over. The Grey Wagtail is back, always nice to see. A Green Woodpecker yaffled as it picked up from the lawn of the house over the road, and a Kestrel was calling just now as I type.

The feeders have been getting busier still, with daytime temperatures now around 9 or 10° and night time at 6 or 7°. Still perhaps a bit above average for this time of year and certainly no more frosts forecast but hopefully we'll see some colder weather in the next month or so which may bring the Brambling (and hopefully others) back. Our visiting 'charm' of Goldfinches is numbering 20+, though 1 photo doesn't always show how busy the feeders actually are. I took almost 100 of one feeder in the Nature Area and then stitched a few together in photoshop after to emphasize it! 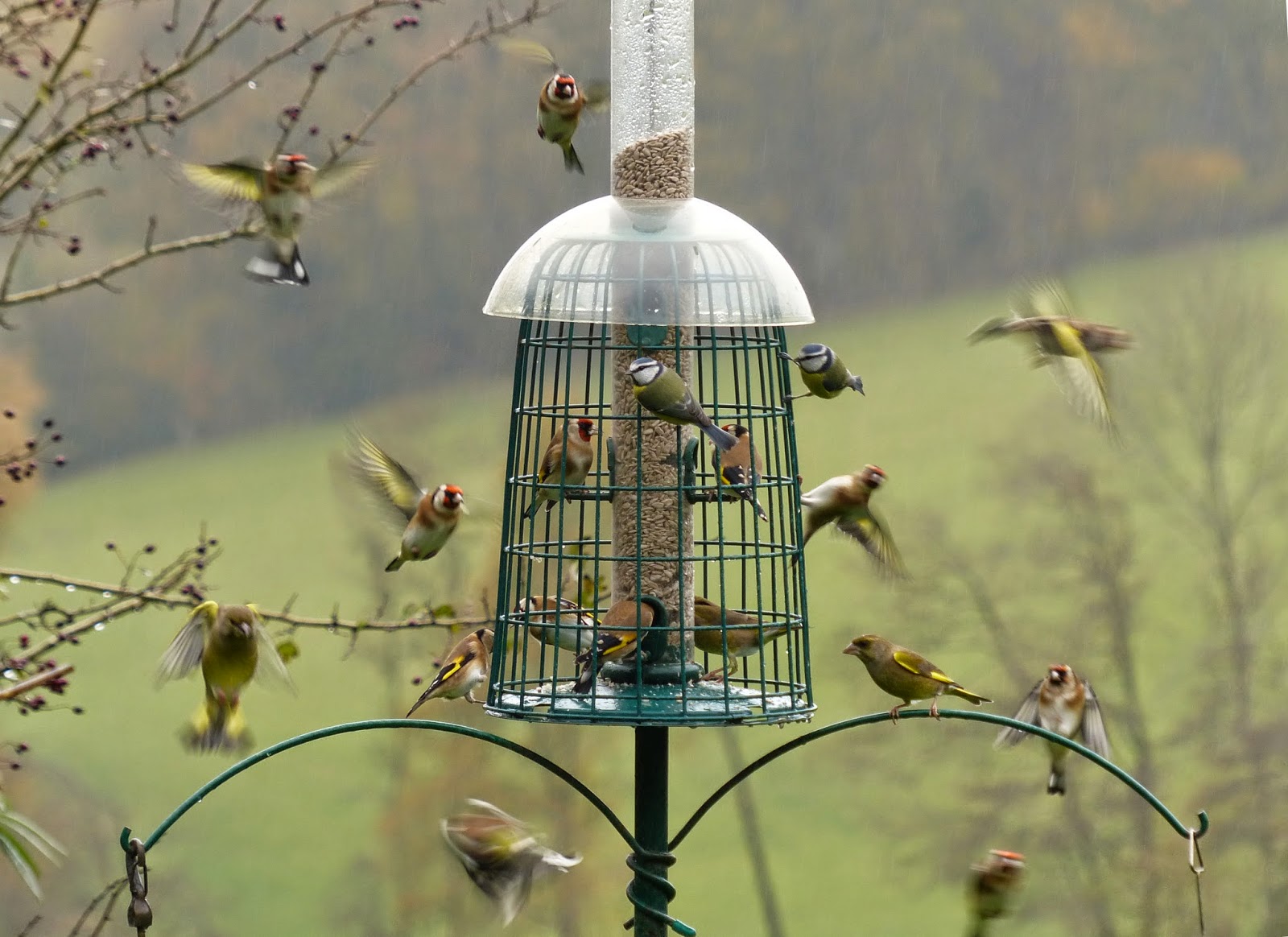 Don't forget you can follow us on twitter, like us on facebook or visit our binocular website which is packed with reviews and advice as well as a good range of binoculars at competitive prices, especially now they are on sale!
Posted by Joe at 16:29 No comments:

The Robin.
UK's favourite bird.  Males and females look identical, young birds have no red breast and are spotted with golden brown. Robins sing nearly all year round and despite their cute appearance, they are aggressively territorial and are quick to drive away intruders. They will often sing at night next to street lights. 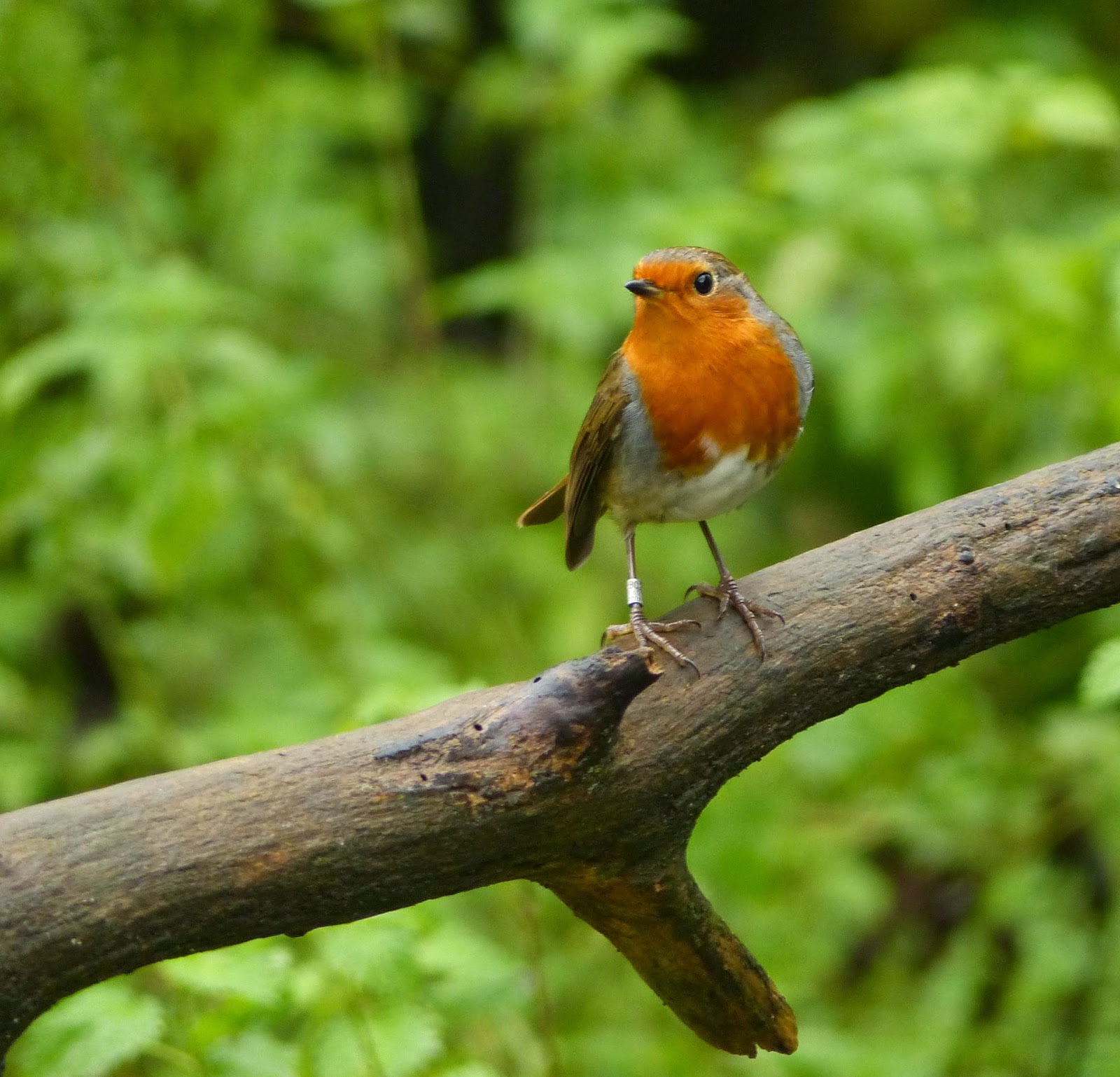 Goldfinch.
A beautifully coloured finch with a delightful liquid twittering song and call. Increasingly they are visiting garden birdtables and feeders preferring Sunflower Hearts and Nijer seed. These photos are from our nature area, a super place to see visiting birds close-up. 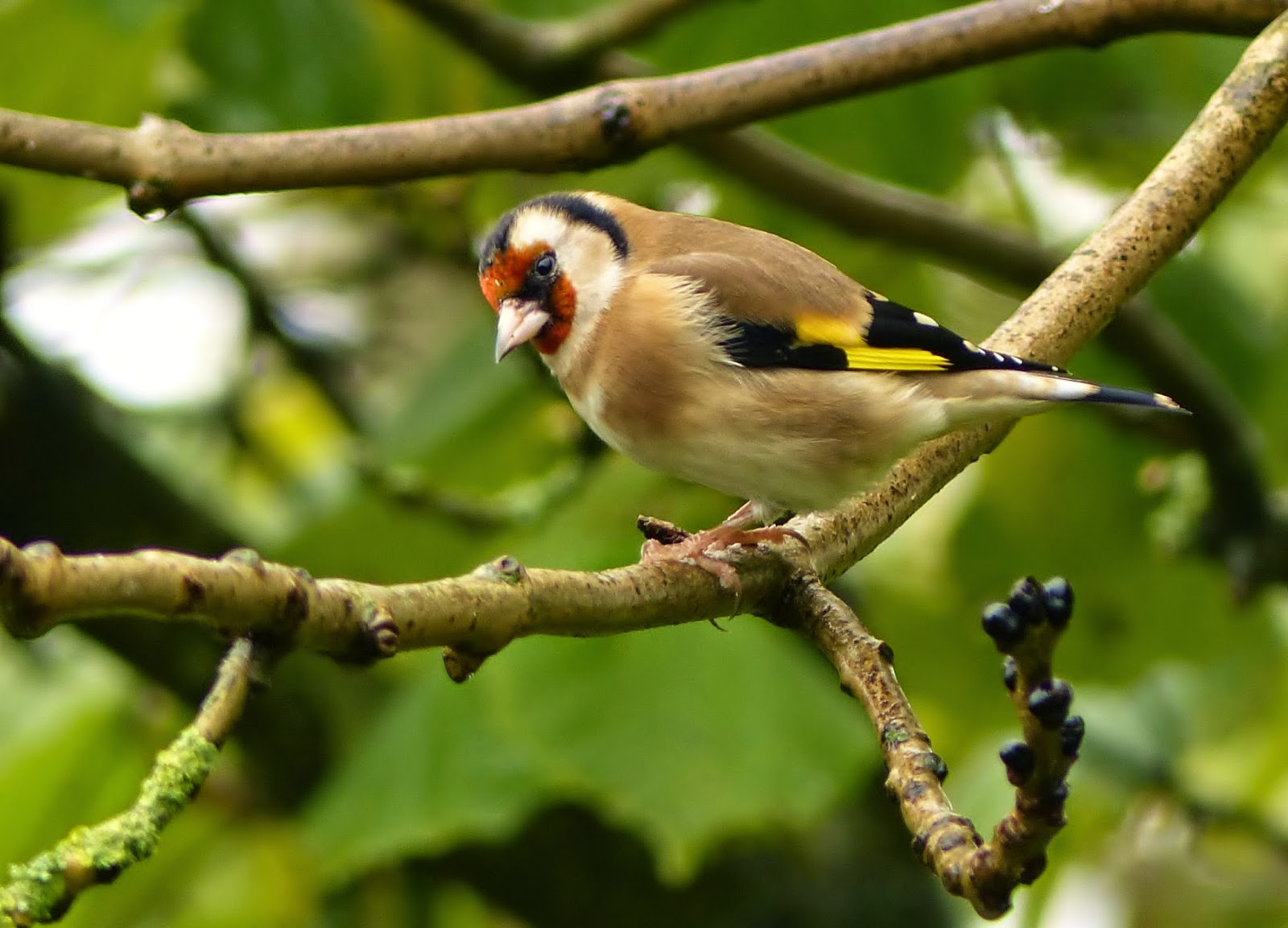 It seems last week's frost was a one off, with the forecast for the rest of the month set for near to or slightly above average temperatures. Not many highlights from the past week to share, with a rare flyover from a pair of Mute Swans possibly the most notable. The Buzzards are regularly out when the blue skies appear and the Sparrowhawk still pops through every now and then to see what's about. The Grey Wagtails which were regular seem to have moved on but we're never short of Pied Wagtails, one of which was too busy preening to fly away while I was taking pictures! 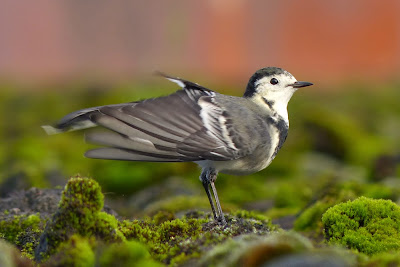 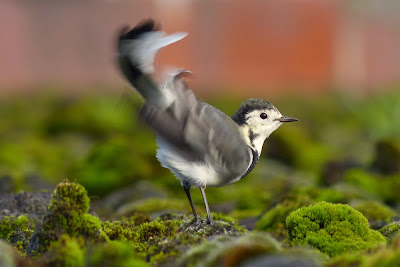 I never get tired of photographing the Goldcrests, they are still coming in daily and are a real challenge to follow and photograph. Fortunately one sat at the top of the shrub in front of me for long enough to get a few more nice shots! 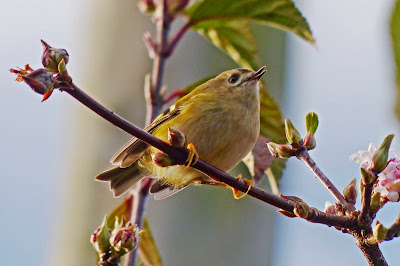 Last winter we only had (that I can recall) 3 frosts, to say the winter weather never really arrived wouldn't be far off the mark. This morning's frost, therefore, was very welcome. 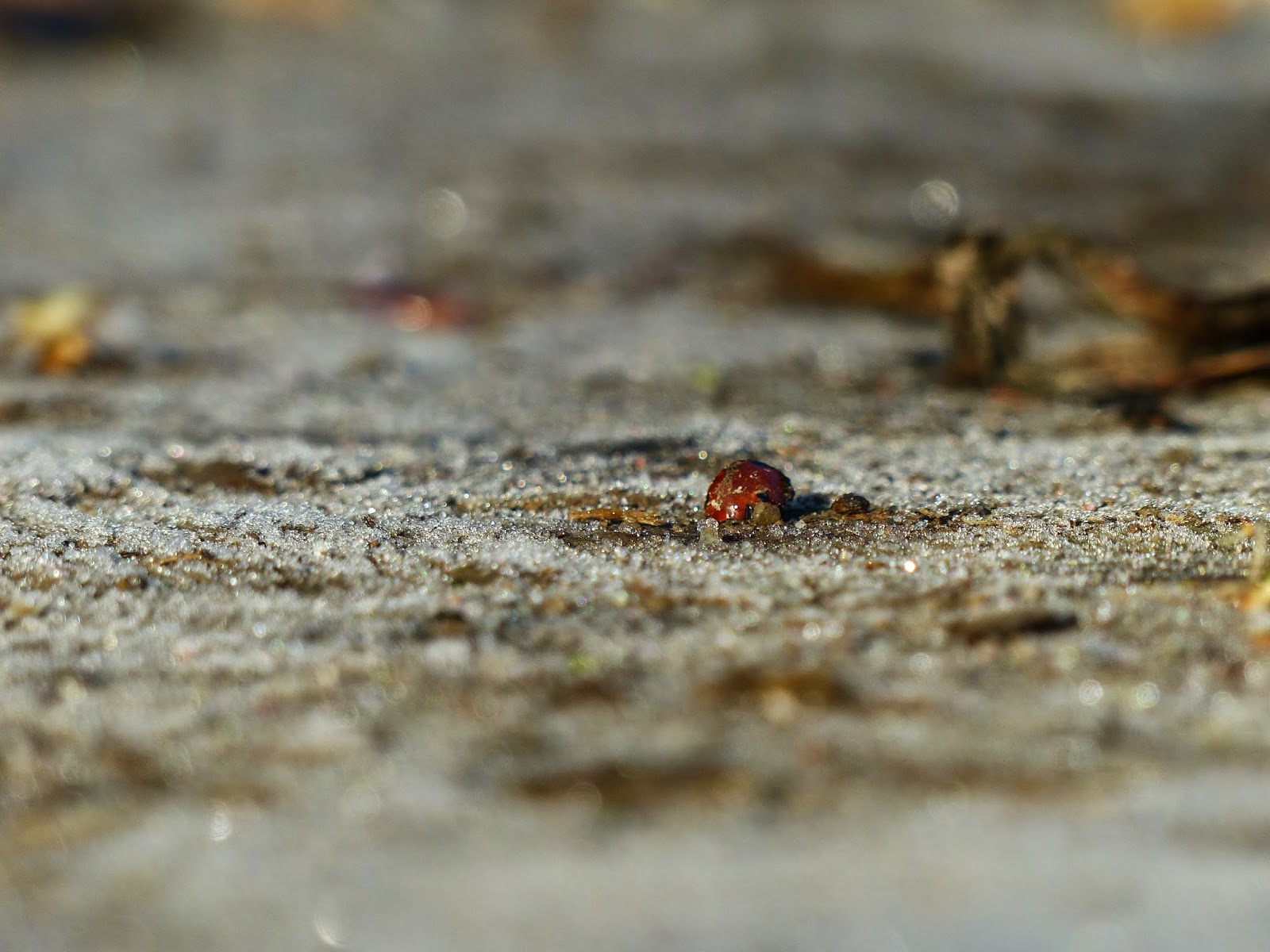 At home, a flock of Fieldfares passed over and the feeders were very busy, with the small garden birds refuelling after losing body heat overnight. Here at Feathers, the Starlings are gathering in numbers as European birds join our resident population to form large flocks, or murmurations, as they are properly known! Song Thrushes and Mistle Thrushes (pictured below) are becoming a more regular sighting, especially the latter, with the odd small group of Redwings passing over but not yet staying. A relative rarity for us is the Coal Tit, though this little beauty has now started turning up regularly outside the shop. The idea of this blog is to keep better records of things like this, so it will be interested to see if the same thing happens next year. 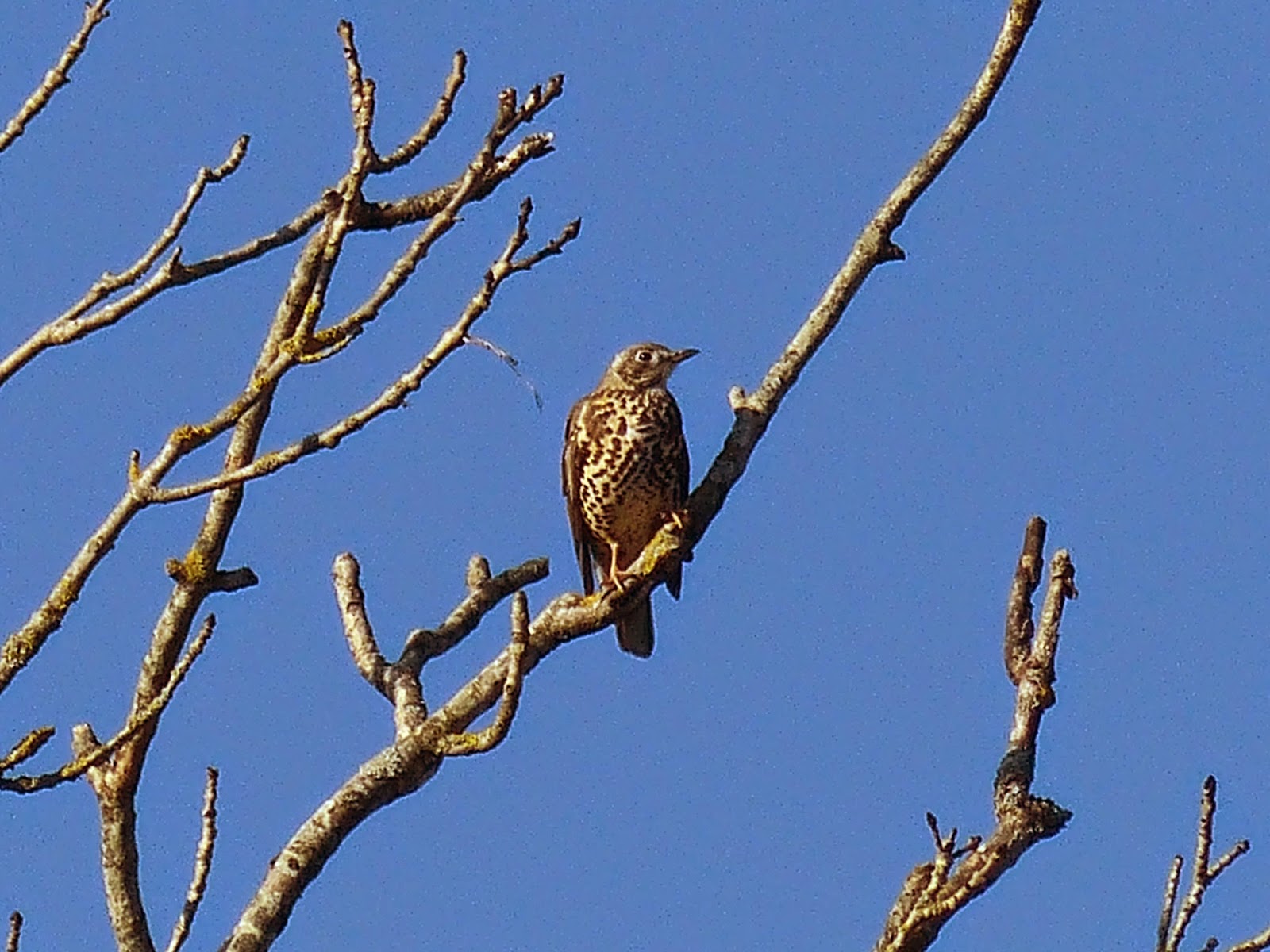 As we enter November, Christmas ads start appearing on our screens and the much anticipated one in recent years has been the John Lewis advert. This years has lived up to the reputation, featuring #MontyThePenguin, a (very realistic) CGI Adelie Penguin:

Many of you may remember these little penguins from Frozen Planeta few years back, stealing stones from other Adelie Penguin's nests!

Don't forget our Winter Sale is now on, most of our range of binoculars have something off and with Christmas 7 weeks away now, now's the time to shop!