It's fair to say I haven't kept up with the blog this summer, for some reason it has been pushed to the back of the queue, even though I told myself I wanted to keep better records of our sightings at Feathers.

It seems this breeding season was fairly successful for most species locally, although there was certainly a shortage of House Martins and Swallows attempting to breed here. There were no sightings of Spotted Flycatchers in Spring/Summer, which have at least attempted breeding in the past 5 years. None of our Tit/Robin nest boxes were occupied this year, though once again they found other cracks and crevices around the farm to nest. The Kestrels successfully raised another brood in Salehurst Church (which also houses the Swifts), although one juvenile was taken in to care with a broken wing and another was found dead shortly after. We're not sure whether there were more than 2 juveniles, let's hope at least one made it. Juvenile Great Spotted Woodpeckers once again provided great entertainment outside the shop, allowing for close photographs. Mixed flocks fed in the oak trees over the road, with a family of Treecreepers present in late July. The feeders on the whole remained fairly active throughout June and in to July, but the warmer weather which graced us late in to the month and is still going strong now (29° here yesterday!) caused a huge decrease in activity. As lovely as it is, we are looking forward to cooler weather returning and the feeders become busy once more.

As we entered early Autumn, signs of migration increased. The Swifts were first to go, whereas many others are feeding up in preperation for their long journey ahead. Good numbers of House Martins have been feeding in the blue skies, joined by young Swallows. Our first sighting of a Spotted Flycatcher was on the 6th September, the same day a pair of Wheatears made a surprise visit to Parsonage Farm. This was only our second record here and our first 'from the shop'. Chiffchaffs have been singing and feeding in the sycamore tree, also enjoying the flurry of insects the warmer weather is providing. All, I'm sure, will be heading south as soon as the cold arrives.

Robins have changed from their summer 'look at me' to their winter 'stay well clear' song. Lots of territory battles taking place outside the shop and in the Nature Area. 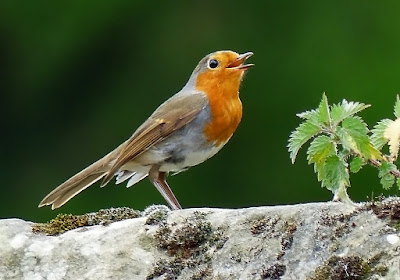 Find our more about Feathers Wild Bird Care on our website www.featherswildbirdcare.co.uk

Our optics website can now be found at www.feathersoptics.co.uk