Good number of Hirundines lingered on til the 14th October - House Martins and Swallows all swarming around above the shop, farm house and Church, feeding up before their long migration south. We are still getting reports from customers of Swallow sightings, mostly around coastal areas. The bulk of Chiffchaffs have moved on too, though there are still a few around and I'm sure some will stay over winter.

I saw my first Brambling and Fieldfares when visiting in-laws in Norfolk (Ingham) on the 15/16th October, then our first Fieldfares here on the 18th. A few flocks have passed over since, but none have stopped off so far and no Redwings yet either. Hopefully the Met Office's prediction of lower-than-average temperatures for November may bring a few in. Lots of Mistle and Song Thrushes have joined the Blackbirds over the past month, feeding mostly in the yew trees.

The sporadic visiting Grey Wagtail arrived back with us in September and is now around most days at some point. Numbers of Pied Wagtails have increased too.
The nicest birding moment in October however belongs to a Buzzard. Although an almost daily sighting, not once in the 6 ½ years up to now has one perched in nearby tree for pictures. On the 19th, as I was outside sampling binoculars with customers, I suddenly spotted one sat at the top of the conifer tree in the farm house garden. Fortunately the bird has quite happy to sit for 10 minutes or so, not only allowing for great views through the binoculars but a good opportunity for pictures too, albeit slightly distant for the Lumix. 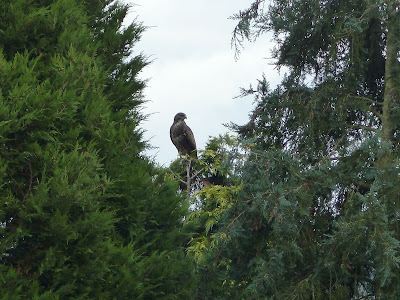 Fortunately the bird took off towards us and landed in the nearest tree to where we were standing - I couldn't believe my luck! 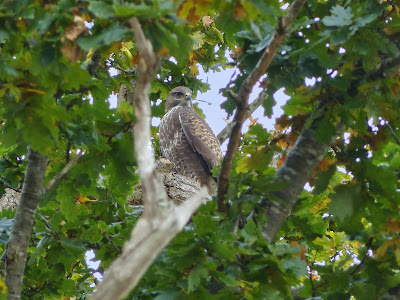 Shortly after it was chased off my a mob of corvids, but not before I managed a picture or two I was happy with.

This month we have started to stock a small range of Spotting Scopes, some are available to try and buy in store with lots more available online or to order in. We currently have a super deal whereby you get a FREE Alta+ 233AO Tripod when you buy a Vanguard Endeavor HD 65A or Endeavor 82A telescope. This deal won't last forever so get in quick if you're after a high quality scope at a very good price! The 65 is actually my favourite of the two and is appreciably cheaper too.

We've also recently restocked our range of Archipelago bird carvings, these make a perfect Christmas gift for bird lovers and all the prices include FREE p&p!

Allan and I were invited by Swarovski Optik to visit their factory in Absam, Austria, staying at the Speckbacherhof in Gnadenwald (less than a 10 minute drive away) for a few days in early October. Arriving in Munich airport on the 2nd, the weather was unfortunately dreadful which made a long coach journey to Austria feel even longer, with very few birds spotted on the way. Arriving late afternoon a the hotel also didn't leave any time for birding on the day, so an early start was decided upon for the 3rd before the factory tour.

A short walk up the wooded mountains in front of the hotel from 6.30am didn't reveal too much, in fact Robin, Wren, Blackbird, Chiffchaff, Pied Wagtail and Chaffinch were just about the only species seen, until we made our way back to the hotel for breakfast. Sitting on top of the roof of the hotel was a Black Redstart, and the Sparrows we had heard on our arrival and thought nothing of turned out to be Tree Sparrows, rewarding our efforts on a cloudy, cold morning. The clouds began to fade as we made our way to the Swarovski Optik factory, the tour and discussions providing plenty of insight in to how these products are made. A short break mid afternoon gave us a chance to sample some of the binoculars and scopes, another Black Redstart on the eco-friendly 'living roof' providing a perfect opportunity to test the clarity of the optics. A Common Buzzard and a number of House Martins in front of the mountains tested the ability of the telescopes. Then out of the blue came a Nutcracker, a lifer for me, flying over our heads before shortly disappearing.


Arriving back at the hotel around half 4 gave us the opportunity in clearer weather to get out and explore the footpaths and hotel grounds a bit more. Half a dozen Tree Sparrows were easy to photograph, as were at least 3 Black Redstarts. Our walk took us a bit further than it had in the morning, but still only 10 minutes from the hotel, where we spotted and managed to photograph another Nutcracker. Activity increased all of a sudden as we realised we had stumbled across someone's bird (and squirrel) feeders. 20 minutes here revealed numerous Blue Tits, Great Tits, Coal Tits, Crested Tits, Goldcrest, Nuthatches, Greenfinches and Chaffinches. A very dark Red Squirrel also entertained us with its antics. Back at the hotel from the balcony we saw a pair of Ravens, many Carrion Crows, Mistle Thrushes, a fly over Siskin, Great Spotted and Green Woodpecker.


The next morning we prepared our suitcases to leave, though our coach didn't depart for Munich until early afternoon. Swarovski had planned a visit to Innsbruck and weather permitting, a trip up the Nordkette mountain range in a cable car. Visibility wasn't great but the trip went ahead, and as we made our way up it was difficult to see the cable more than 50 yards ahead. At 7,500ft up, it was also pretty cold, something we hadn't planned for. A glance of a corvid flying past the cable car as we departed gave us hope though, and shortly after making our way outside we spotted 2 Alpine Choughs, flying between the mountains. Like boyish fanatics, we struggled to get any good photographs, until around 30 birds picked up from what could only have been 30 yards to the left of us, flying directly over our heads! What a magical moment it was, a lifer for both of us, and we could only laugh after spending quarter of an hour hopelessly chasing one or two birds.

The weather deteriorated once more on the coach journey north, but somewhere roughly half way between Innsbruck and Munich we did spot around 10 Great White Egrets in a field, a nice way to end the trip.

Thank you to Swarovski Optik for inviting us and to the Speckbacher hotel for their hospitality.
Posted by Joe at 16:38 1 comment: