Last out and first in

Although the number of breeding house martins has dropped here over the years, there were plenty of visitors up until mid October. Then, only a few days after the last hirundine had departed, the first of the redwings arrived - the characteristic 'seep' unmistakable as it flew over. I had heard and seen a few flocks on Ashdown Forest just a few days earlier so knew they were around in Sussex. During the same excursion, I became familiar with the flight call of meadow pipits, which were in good numbers at Old Lodge Nature Reserve. The next morning at work after getting out of the car, the first thing I heard was the same call before spotting a small flock flying around. Since then, I have heard and seen them on numerous occasions, so I can only imagine there are a few more around here in the Autumn. The addition of meadow pipit brought our species list at Feathers up to 95.

Probably the most notable change this month has been the increase in the number of coal tits. Their behaviour of caching food makes it hard to count, as they are 'in and out' in a matter of seconds, but the most we have counted at once up to now is 6. This is fairly unusual for coal tits in the south east, and the increase has been noticed by many customers too. Subsequently, sales of black sunflowers in the shop have increased exponentially. Sunflower hearts and niger seed are also selling fast thanks to the huge number of goldfinches around at the minute. Goldfinches are a resident species but many spend the winter in France or Spain, so October sees a huge movement of birds heading south, but feeding up in the south east before crossing the channel.

The main attractions of Autumn migration tend to be Geese and Thrushes as thousands make their way in to Britain from the north. There are, however, thousands of other small birds which flock to our shores to spend the winter. Many of these, like Robins, Coal Tits and Goldcrests, are also resident breeding species, so tend to go unnoticed. In fact, it's really thanks to ringing that we now know Goldcrests migrate to the UK from as far away as Russia but more commonly Scandinavia. 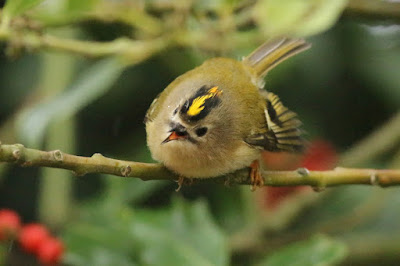 October is a great time of year to look and listen out for these diminutive birds, as not only does the population get a boost from European migrants, but also as the temperatures drop and nights grow longer, Goldcrests will need to spend more of their time searching for food. Couple these factors with the falling leaves, it's easier to find Goldcrests now than during the summer months. Photographing them, however, is an entirely different prospect! As Europe's smallest bird (alongside its rarer cousin, the Firecrest), they don't exactly fill the frame unless they're close, and their constant movements in search of food doesn't give you much time to get a photo. 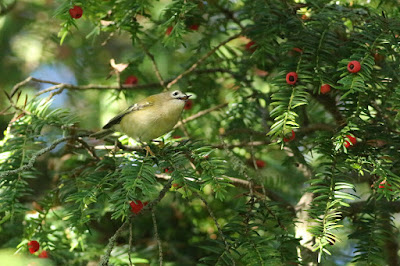 None-the-less - I implore you to get out searching, as simply watching these birds is a real treat. Here at Feathers they can be found on a daily basis, often in one of the trees in the car park. If you're setting out in search of Goldcrests, try your local woodland or country park. Their high pitch call will often alert you to their presence before you see them, so try to learn that first! 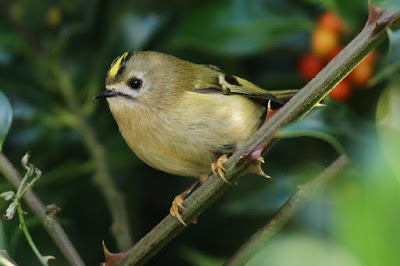