June's fine, warm weather seemed to be the best of the summer as it made way to cooler temperatures and plenty of rain throughout the school holidays. Apart from the odd day, the feeders in our new 'nature area' outside the shop have remained busy throughout the season. The bulk of the birds using the feeders have been Blue Tits, Great Tits, Coal Tits, Collared Doves, House Sparrows, Robins, Dunnocks, Chaffinches and Goldfinches. We do see Greenfinches occasionally, although of course their numbers have declined dramatically over the past 12 years thanks to Tricho. The Great Spotted Woodpecker family have mostly disappeared, going back to natural food which is most abundant for them at this time of year, as is also the case for Blackbirds and Starlings. Nuthatches visit fairly regularly but are always in and out in a flash.

Non-feeder visitors include daily Goldcrests & Chiffchaffs, with Swallows and House Martins overhead. The Swifts departed some time in August without so much as a goodbye. Our first Spotted Flycatcher sighting of the year came on the last day of August down by the cow sheds where the Chiffchaffs have been so active. Unfortunately the bird didn't stay long!

A week later on the 9th September, in the very same spot, came our 95th addition to our species list. Once again the Chiffchaffs were actively searching for insects when another warbler arrived, sat and had a quick preen before flying off. The visit lasted no more than 10 seconds but fortunately I managed to get a few photographs to confirm its ID as a Reed Warbler.


Last week saw our first sighting of a Treecreeper in a while. I recognised the call immediately and managed to find the bird on the Oak Tree in the car park. My photos aren't particularly good but it was nice to see none-the-less!

Most likely the same pair of Grey Wagtails which successfully raised a brood here in May/June have been back recently too, joining the Pied Wagtails.

Finally, this afternoon I have seen a pair of Marsh Tits back for the first time since February. I had gone out after hearing the Treecreeper again, and while looking for it in the oak tree I spotted the Marsh Tit at the feeder. They were going for Black Sunflowers, presumably caching them for the winter.

At the start of September we became a Premier Dealer for Zeiss binoculars. This addition to our range furthers our reputation as the best place in the county for trying out optics, and gives customers an opportunity to compare two alpha brands in Swarovski and Zeiss. We now have around 60 pairs of binoculars in stock so the cabinets are looking pretty grand! 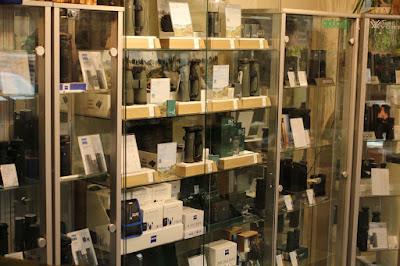