The results for the 2015 Big Garden Birdwatch were released last week, with the House Sparrow keeping the UK top spot and the top 10 remaining the same species but in a slightly different order. House Sparrows have declined by an estimated 71% from 1977 to 2008, but recent evidence suggests numbers in East Sussex have been increasing since 2010, with the county BGBW results showing a 25% increase since the turn of the decade.

The top 20 species for gardens in East Sussex are recorded in the table below, courtesy of the RSPB.
The table shows the 'County', 'Species', 'Mean', 'Rank' and '% Gardens'.


Great Spotted Woodpecker and Wren took the number 21 and 22 spots respectively, with both spotted in over a quarter of gardens throughout the county.

Allan's Beckley garden often attracts Reed Buntings in the winter, but up to the 9th March they were a no show, until one female arrived for a brief visit. 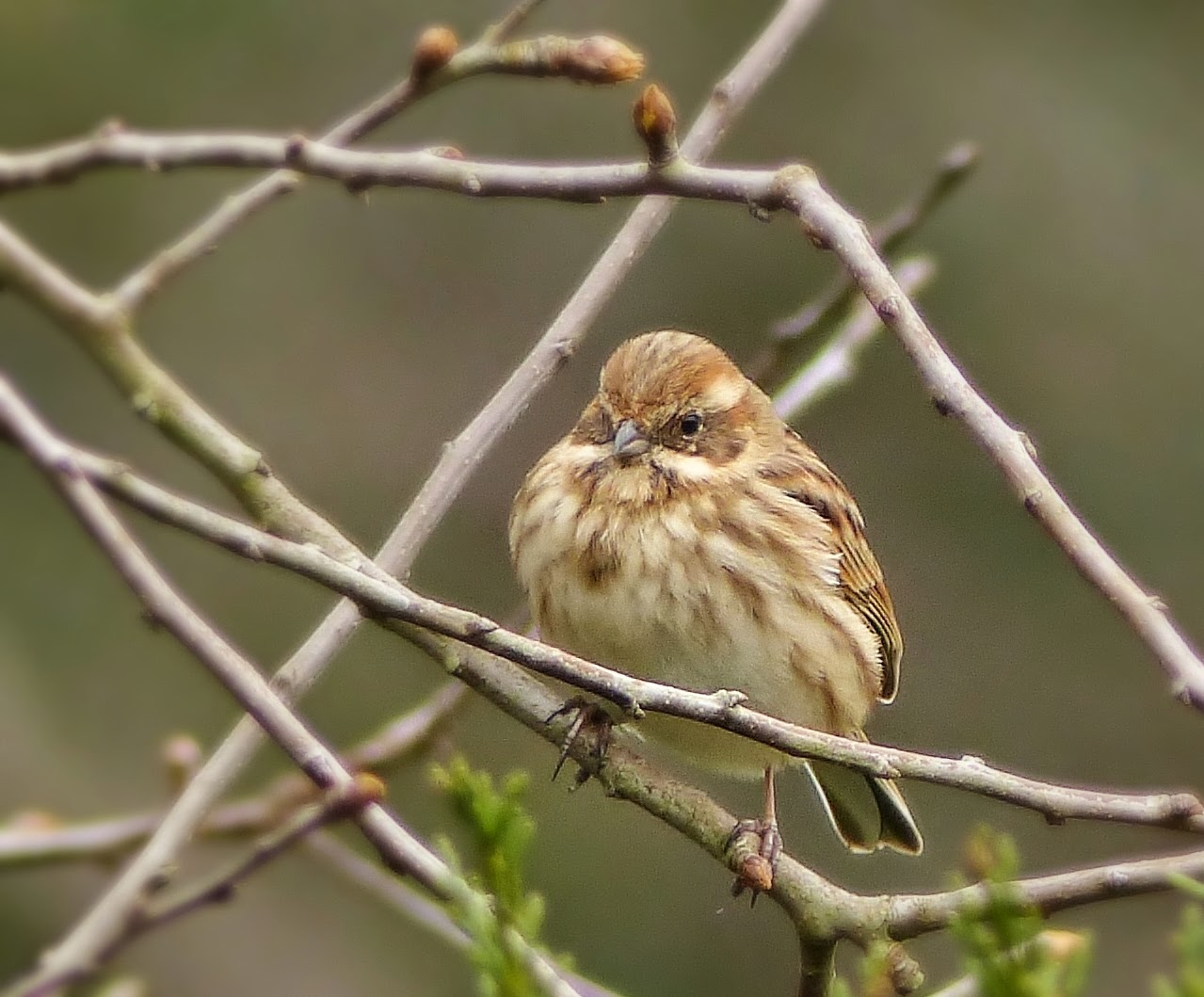 The Treecreepers have been quieter though a ringed one visited the feeder on the 10th and another was back on the wall by the car park on Sunday 22nd, when Allan took this lovely shot. 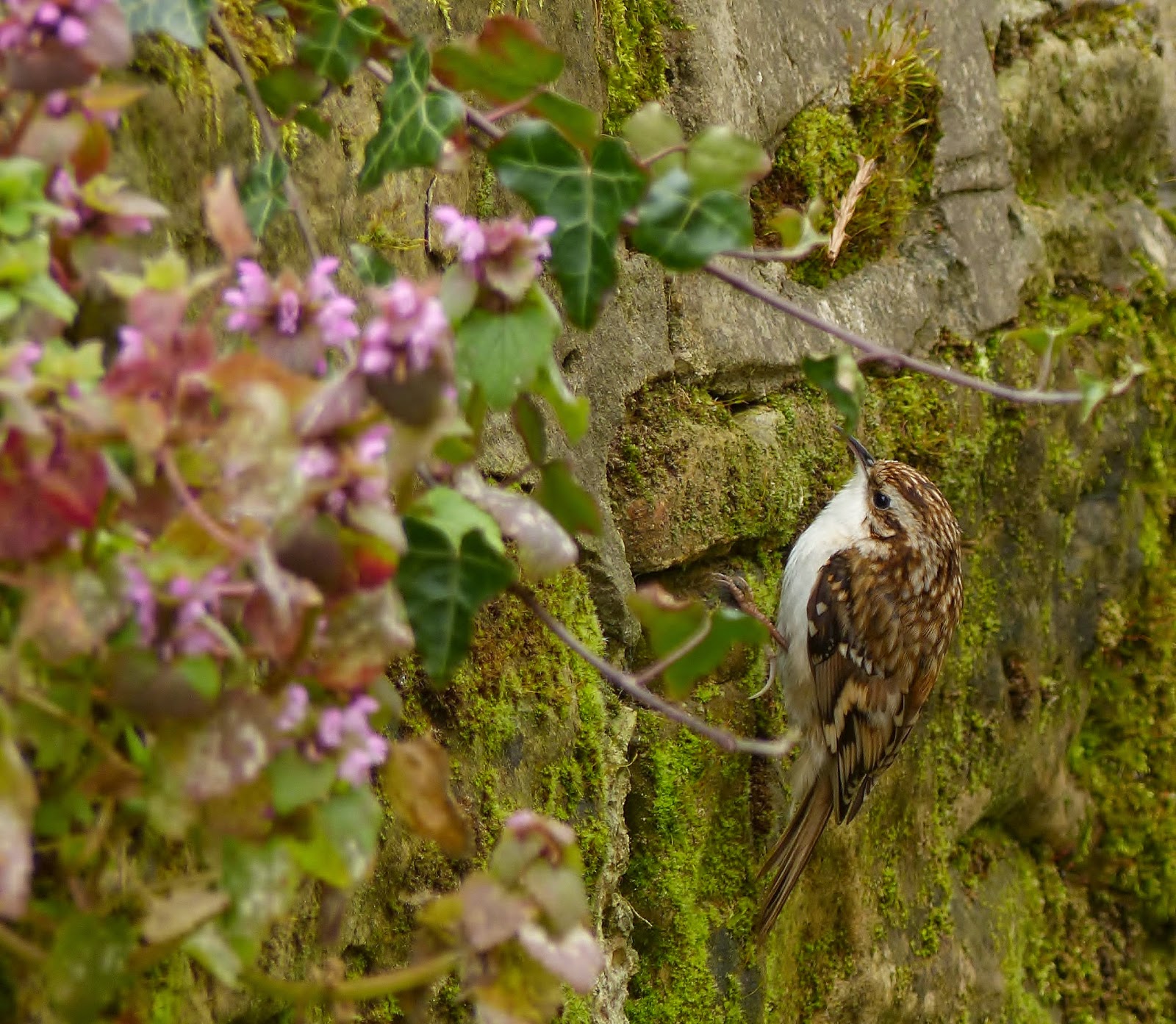 At home (Staplecross) in the early afternoon on the 22nd, two Red Kites passed overhead. On his way to work on the 26th, there was another Red Kite on the brow of the hill just up the road from the shop, heading off in the an easterly direction, later spotted perched in a tree off the Hawkhurst Road by a customer at around 11am. The 26th March also brought about a surprise visit from a drake Mandarin duck, landing in the tree overhanging the entrance to the car park. 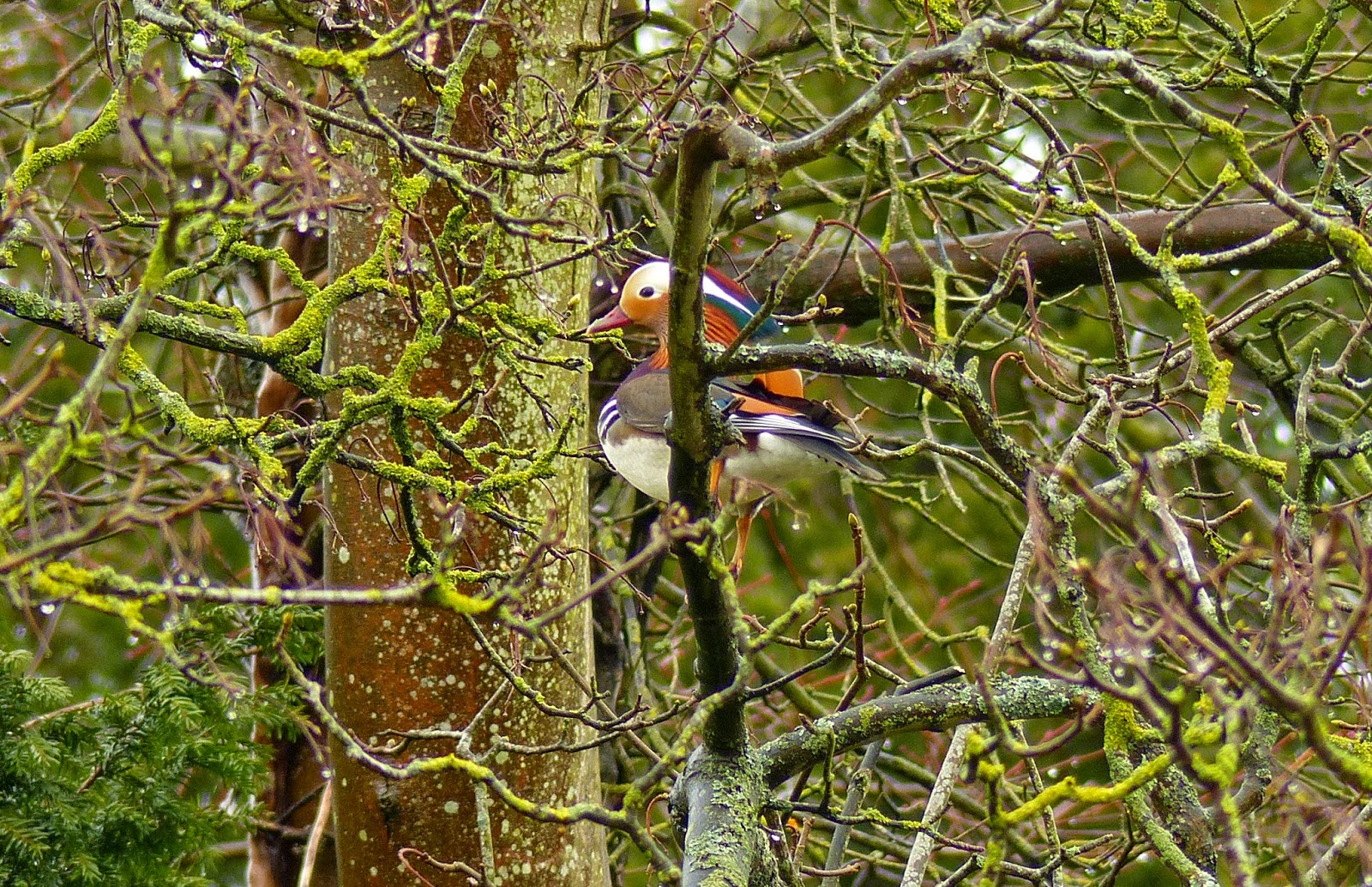 In the afternoon, 5 visitors to the hide reported seeing a pair of Siskins in the Nature Area, though unfortunately the sighting wasn't confirmed by ourselves and we are still, as of yet this winter, to see any Siskins at Feathers.

At around half 8 in the evening, driving back past Footland Woods near Cripps Corner, a Tawny Owl was sat right in the middle of the road, only flying off when I was pretty close by.

At around 2 oclock on the 27th, I spotted another Red Kite in the same place as Allan had the day before, so presumably the same bird has been lingering in the area. There has been plenty of reports of Red Kites on the SOS sightings pages recently, with records of 6 nesting pairs on the downs in West Sussex. Perhaps a sign of things to come!

The Wren (or Wrens!) has been very showy in the Nature Area, often spending prolonged periods down by the rocks and logs next to our pond. They're great fun to watch but are a real challenge to photograph as they flit about. 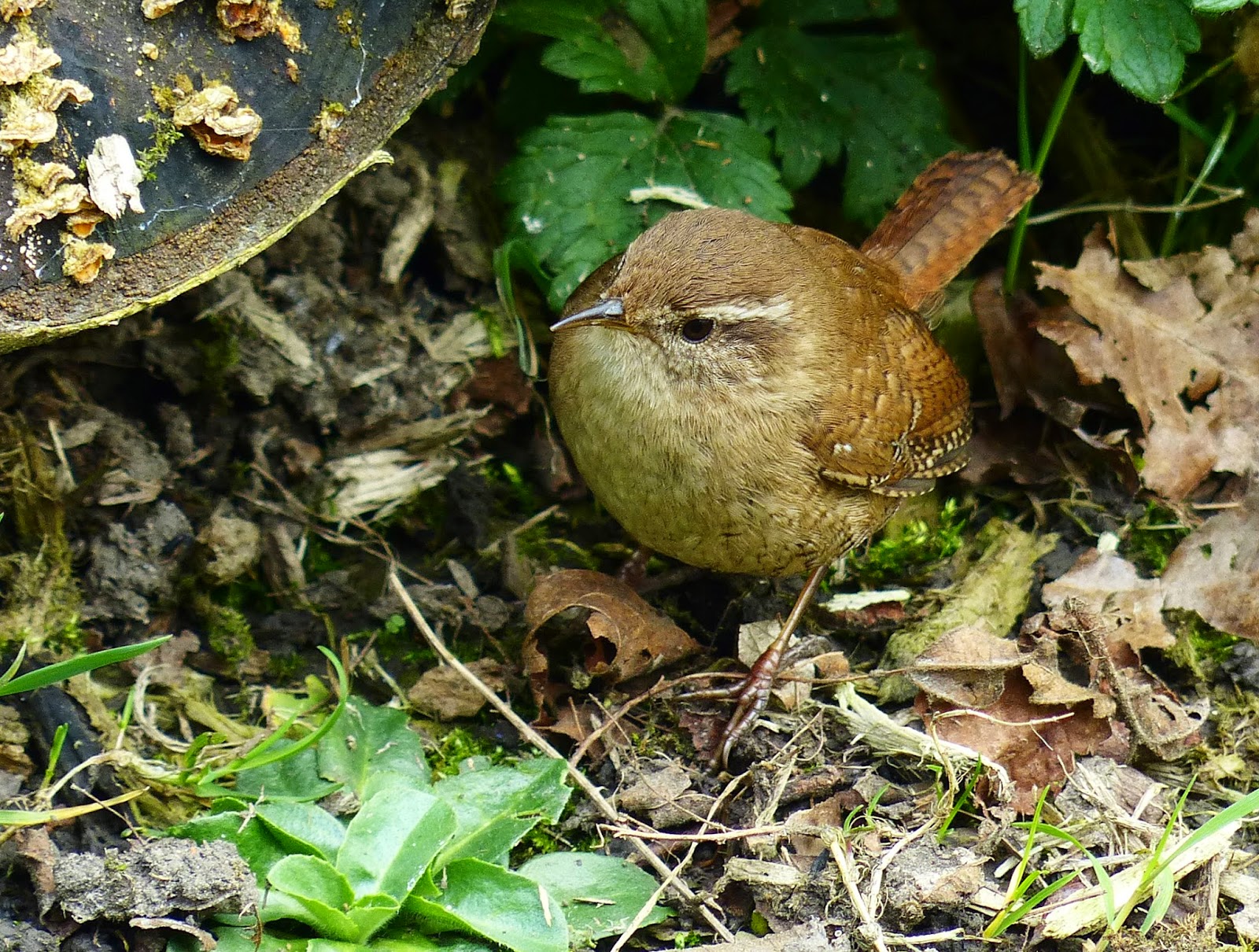 We're not sure what stage the Kestrels are at in the Church or whether they will nest there at all, though they have been spotted on numerous occasions so we hope they choose to use it.

The general trend in recent years is for the mean egg laying date of most birds getting earlier and earlier. This trend is believed to be caused by climate change, with warmer weather allowing for better food availability earlier in the season. Last year's warm, wet winter provided almost no frosts at all in Sussex, leading to a particularly early breeding season, an anomaly that was opposite to the breeding season of 2013, where a cold winter which held on until April led to very late broods. To give you an example; according to data from the BTO's Nest Record Scheme, the 2013 average laying date for Blue Tits was 12.3 days late (relative to the average from the previous five years) whereas it was 5.9 days early in 2014. It will certainly be interesting to see how 2015 sits in the table, with what has been a typical British winter, laced with cold snaps and warmer periods alike.

The Bullfinches, which had been resident for so long here recently, have moved on, as well as the Treecreeper which hasn't been spotted for a while either. The Goldcrests however are frequent visitors, often spending a long time searching for food in and around the yew tree over the road. 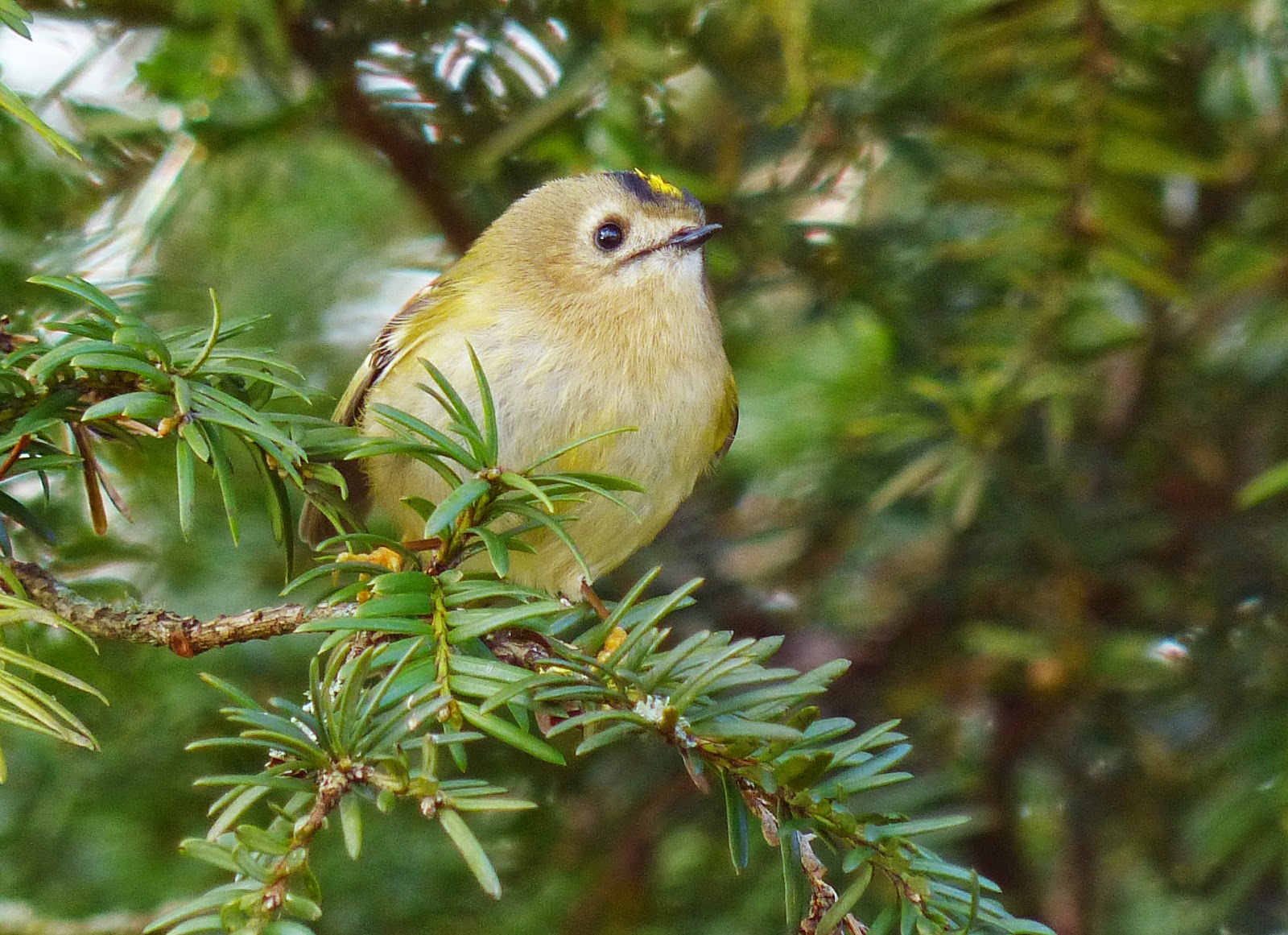 Still the Siskins remain a 'no-show', with just one male turning up on my feeders at home (Staplecross) on a few occassions between late Feb and early March. 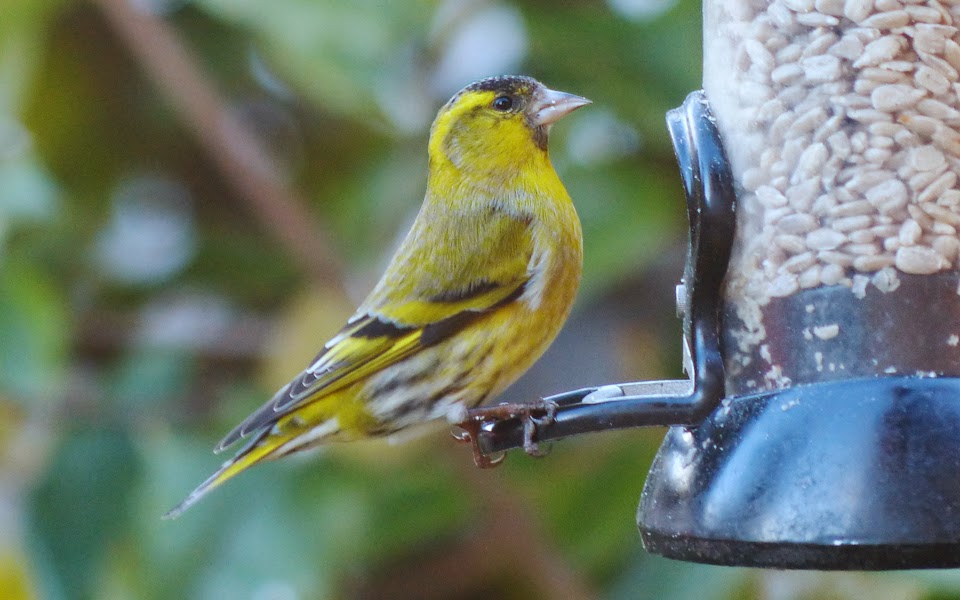 On the 27th February we had our highest count ever of Buzzards as 8 graced the blue skies together. The pair of Kestrels have been bonding and inspecting the nesting site in the Church where they have nested in previous years, though we're not sure what stage they are currently at. It's most likely they haven't laid any eggs yet. One Blackbird was spotted this morning collecting nesting material, they are one of the earliest 'garden birds' to breed. We haven't heard them singing yet, though I'm sure they may well have started in the warmer climes of towns and cities. The Chaffinches have certainly started singing, their colours becoming increasing bold too as they attempt to lure a female. As the temperature progressively increases, the feeders begin to quieten down, though there is still a fair amount of activity, especially with the good size charm of Goldfinches. Here's a composite photograph put together with a few snaps of the same feeder in use in our Nature Area. 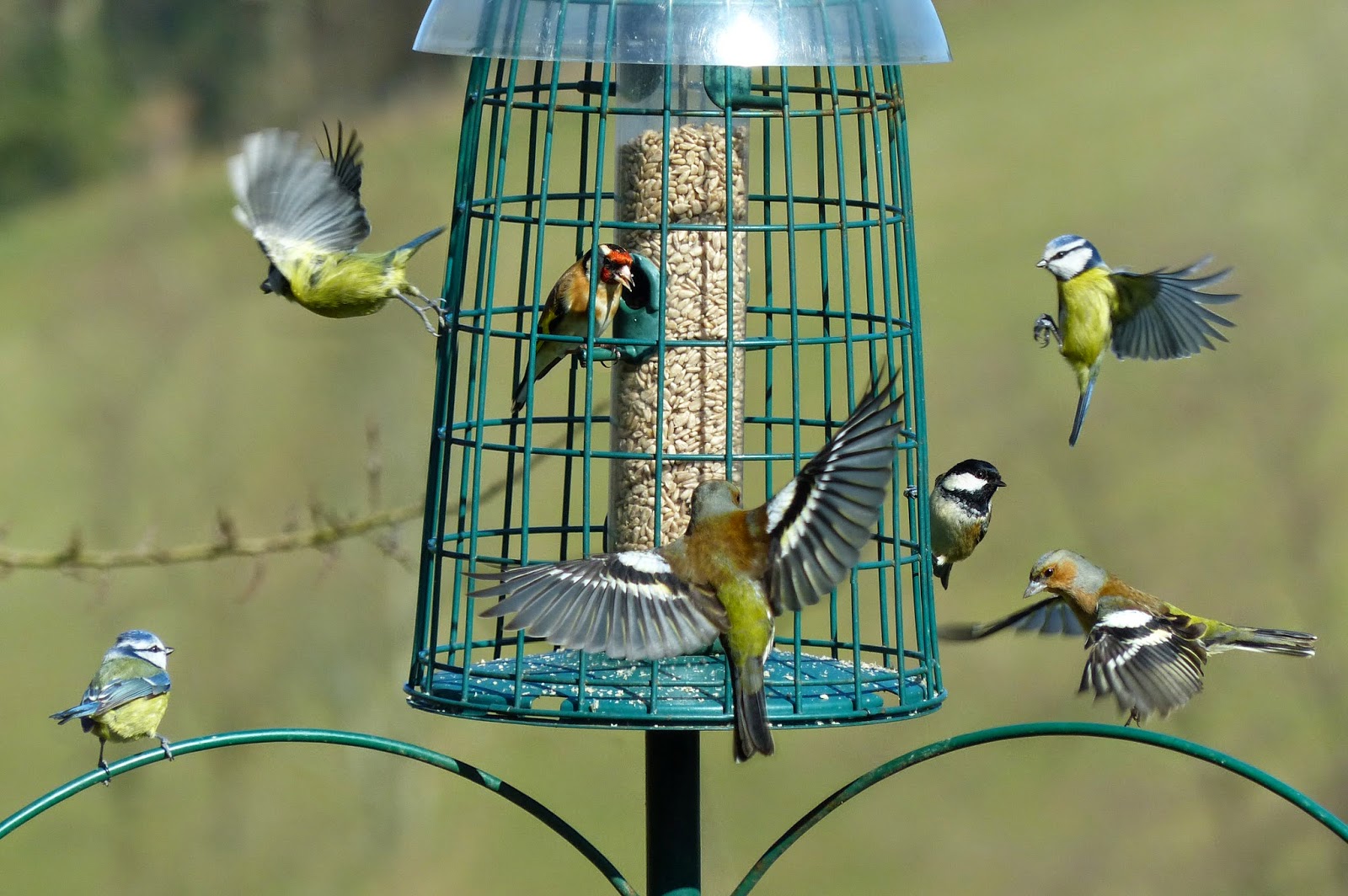 Just to follow up on the Blue Tit with a deformed beak (see post) spotted on the 27th January, the same bird was back again yesterday afternoon in the Nature Area unfortunately looking a little worse for wear. 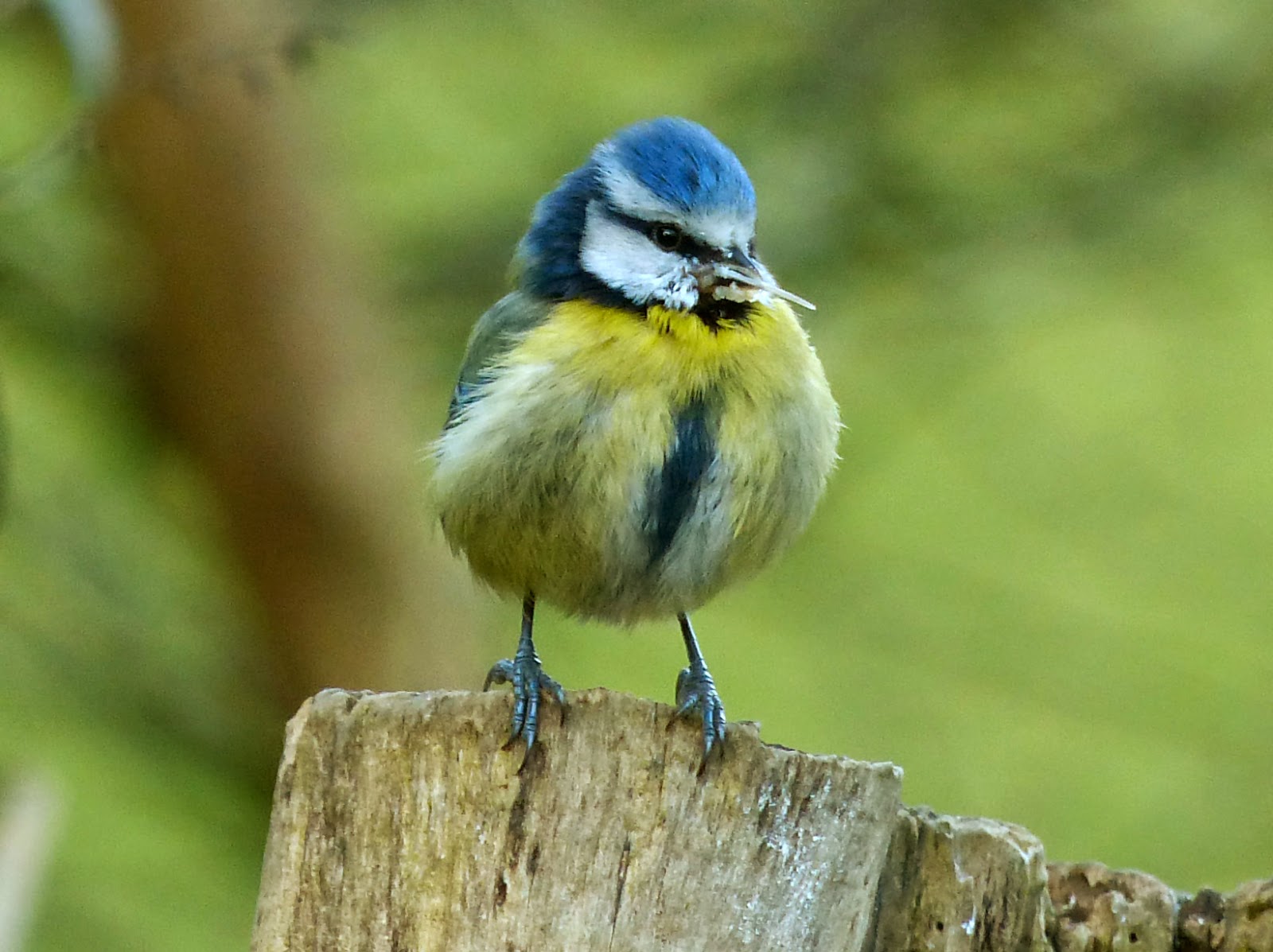 Allan had a rather amazing Blue Tit in his garden on the 17th Feb, with a curved lower mandible and highly elongated, decurved upper mandible crossing over. This particular bird looked in pretty good nick given its condition but how it continued to feed one can only imagine! 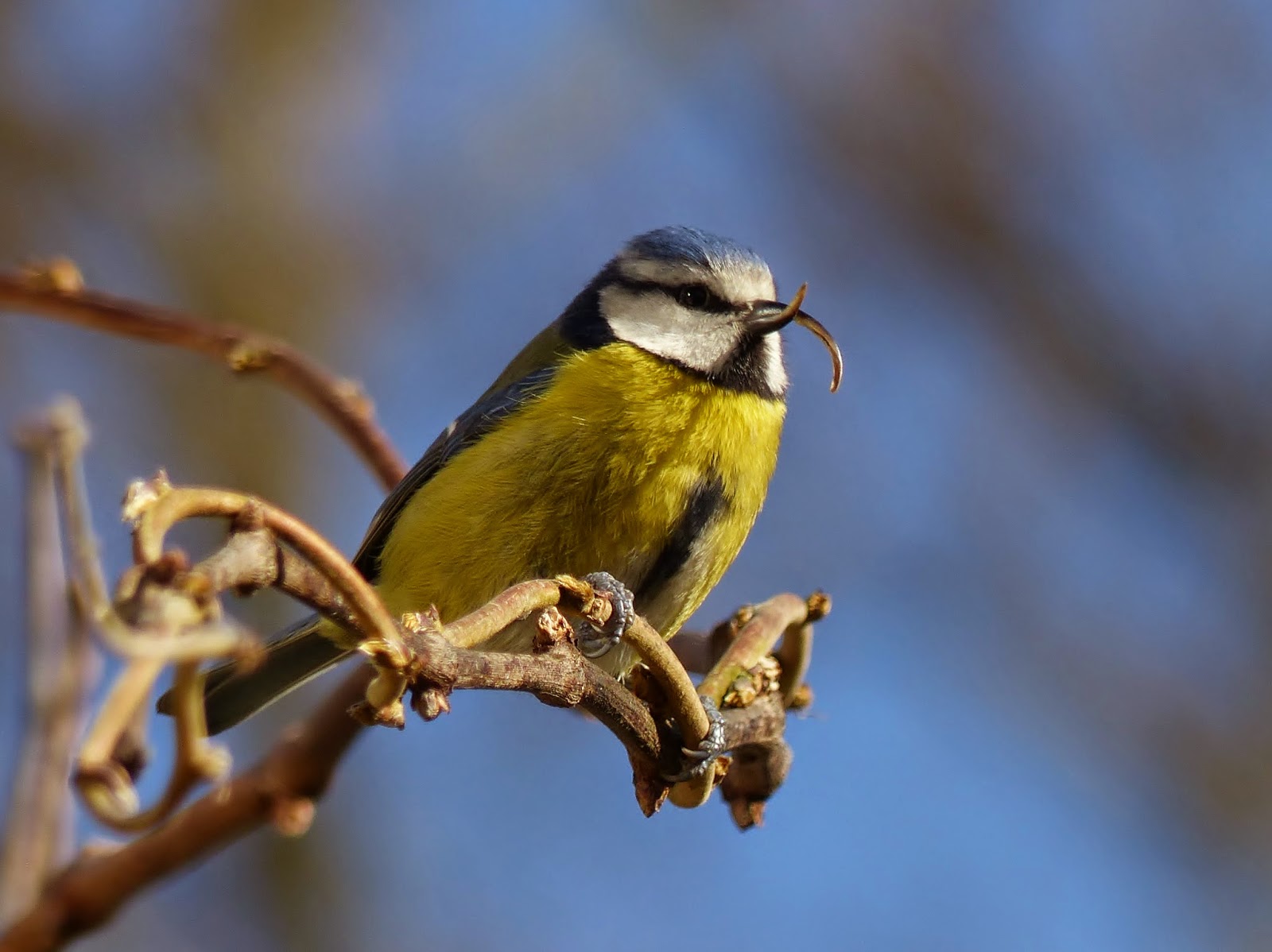