Our Owl Display, Beer and BBQ event on the 18th July was a huge success once more - with plenty to do and fine weather, the day was enjoyed by all who attended. Owls About Town had a smaller Parliament of Owls this year, owing to a busy schedule and a longer journey since their recent relocation to Selsey, but as always they spent the entire day ensuring no-one was left out, even forgoing lunch! In the garden, the barbecue was more popular than ever and our optics tent looked great and allowed us to demonstrate and advertise just some of the binoculars we sell.


The past month or so has been relatively quiet on the bird front at Feathers, as is typically the case at this time of year. Feeders at Allan's house and even at home seem to be busier than they are at work, with Allan's Siskins in particular feeding regularly.

On the 30th July we were entertained by a family of Goldcrests, as always, unperturbed by our presence, at one point coming too close to focus with my camera! None-the-less, they're not easy to photograph and despite there being numerous birds and the two of us taking hundreds of photos, we couldn't come up with anything fantastic, though a Wren did sit up nicely while we were there.


Sometime around the end of July/ early August saw the departure of the Salehurst Swifts, though the House Martins are still around.

On the 6th August , a Hummingbird hawk-moth visited the buddleia which is growing out of the wall outside the shop. 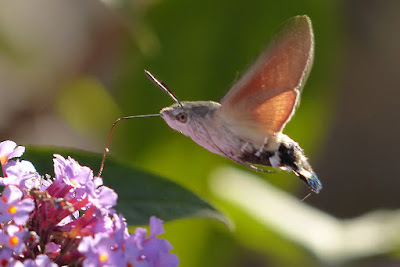 On the 4th August and again on the 21st, at least one Raven was calling on its way overhead. When we first added a Raven to our list, we expected it to be a very rare occurrence, but it seems nowadays they are becoming more widespread and though it's not fair to say they are regular, it's certainly no longer a big surprise to see one.

Last but not least, a Treecreeper made a brief appearance this morning to the post outside the shop. It was in and out too quick for photos, but needless to say we'll be keeping a keen eye out today as we haven't photographed one in a few months!