It's very hard to tell this early on how successful this breeding season may have been, but indications are it's been a good one. Though only one of our 10 nest boxes has been occupied (the Starling box), it seems there are plenty of other nest sites available. Once again, the Church has provided a home for a pair of Kestrels (who have raised a brood of four) as well as a good few families of Swifts. 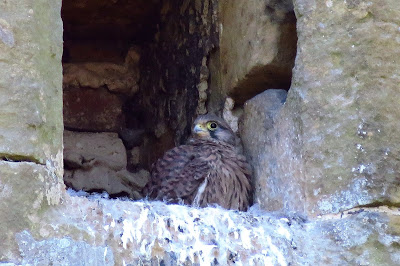 The Pied Wagtails are a yearly nester and though we don't know where they settled this year, we have recently seen a few fledglings being fed by mum and dad. A new nesting bird for us here is the Grey Wagtails. With the river Rother close by, it's likely they have bred there in recent years, but this May they began nest building under the eaves of the workshop by the kitchen, about 50 yards from the shop door. 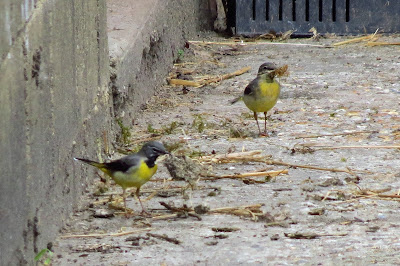 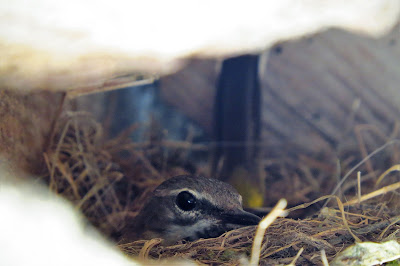 Also very close by were a pair of Robins and a pair of Blackbirds, who both chose the storage room to nest. A safe choice as both nests saw young fledge successfully. We've seen baby Blue Tits, Great Tits, Chaffinches and Goldfinches on the feeders, along with of course they 20/30 young Starlings, but the highlight so far has to be our Great Spotted Woodpeckers. The male first brought his two youngsters to the feeders in early June and spent much of his time between the suet balls and peanuts, breaking them up in to bite size pieces to feed to the fledglings. On the 7th, one of the babies flew in the shop window with quite a thump - fortunately no injuries sustained apart from one hell of a headache, as it took a couple of hours under my care before flying off. The day after it was back with its sibling and dad, being fed again, but didn't leave when they did. It was only then did I believe it was the same bird as it allowed me to come very close. Our very friendly woodpecker promptly became a tourist attraction, with customers coming to enjoy a once-in-a-lifetime experience of getting face to face with a wild GSW. We were cautious to not let it become to familiar with human contact and the good news is we have seen what we can only assume to be the same two juveniles back with its parents, now feeding independently. 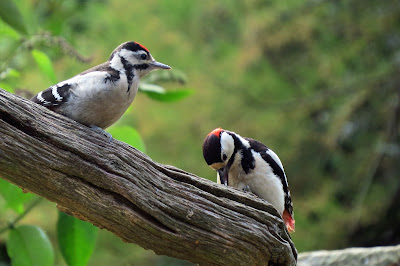 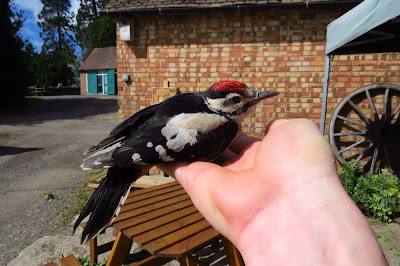 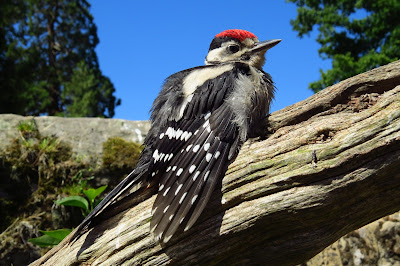 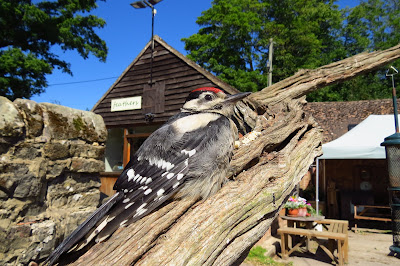 These past few days have been unbelievably hot, with temperatures above 30°C, so the feeders have been particularly quiet. From mid May until now, however, activity was very high, particularly the suet balls which were going down twice a day. The heat is due to drop now so we may see the feeders pick up again this week.

Unfortunately in late April/early May we made the difficult decision to close the hide and nature area. With the adjacent oast house falling down, it posed a genuine health and safety risk for visitors. Within the space of a few days we had created a mini nature area outside the shop, with comfortable seating space providing a perfect spot for customers to sit and watch or photograph the birds in comfort with refreshments on hand. This small area has turned out to be a bigger success than we expected, and though it's not as established as our old area, many species are already using it happily and we hope many more will join us soon!