Temperatures and rainfall were about average throughout December and January, but things changed a bit in to February as the colder, drier weather arrived. A sprinkling of snow early in the month didn't last long, but late February into early March brought the 'beast from the east' as it became known. Temperatures plummeted, with the 1st March recording the coldest temperatures on record for March. Significant amounts of snow accumulated, although we didn't get as much here as many other parts of the country. We stayed open all week so the birds were well looked after, with extra supplies put out to keep them going. Nothing out of the ordinary visited our feeders but lots of customers recorded fieldfares, redwings, lapwing and snipe coming in to their gardens. None-the-less, consumption increased dramatically as did sales. 160 boxes of 50 fat balls sold in under 2 weeks as the birds looked for high energy foods to help them survive the freezing weather.

Without a shadow of doubt the talking point of the winter was the hawfinches, which I have highlighted in my other blog posts. Our last sighting here was on the 3rd March, nearly 3 months after their arrival in December. My best photos were taken on Monday in Beckley as a good few were hanging around the small stream near the village hall. 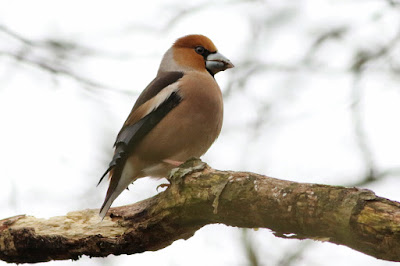 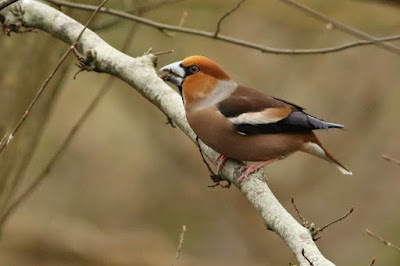 It's not outside the realms of possibility that some may stay to breed, though most likely they will all be returning to Europe where they are more common.

Temperatures now are set to return to double figures, some 15° warmer than last week. As we progress through the month the feeders will quieten down as the birds begin nest building and the availability of natural food increases. We'll be looking out for summer visitors and keeping a note of their first arrival dates to see how they compare to previous years.