June is normally one of our busiest months of the year, both in the shop and for birds on the feeders, as all the fledglings arrive in gardens. It seems this year is significantly quieter, very few Blue Tits or Great Tits, the Sparrows are busy but not a whole load of youngsters, the Starling youngsters were out in May and have slowed down too. The Great Spotted Woodpeckers have brought one juvenile in though, which is always nice to watch, and the Nuthatches are certainly regular at the minute too.

A brief but nice surprise in the Nature Area was a male Blackcap, just staying long enough for Allan to get a nice photo. 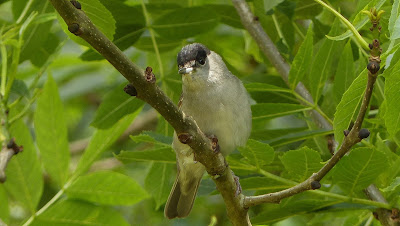 Unfortunately the Spotted Flycatcher's attempt to breed was unsuccessful, the nest was built but then destroyed, presumably by a corvid or rat. A big disappointment for us as they now haven't bred here for the past 3 years.

The Pied Wagtails didn't breed in the same place as last year and so far we have seen no young, though they are seemingly now gathering nesting material so we're keeping watch on that.

The Kestrels, however, did breed in the same place again as the Church tower evidently provides a safe home. Though we haven't kept up with their progress as well this year, they are certainly very active now and it seems the young are out flying now, though not venturing too far from the safety of the Church, particularly as the Jackdaws give them a lot of grief! 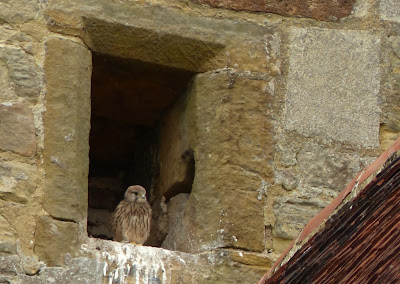 Allan had an unusual event in his garden recently as an adult Great Tit was feeding a couple of baby Blue Tits. This is known as cross-species feeding and according to the linked BTO article can be down to a number of factors, including mixed clutches and nest failure.